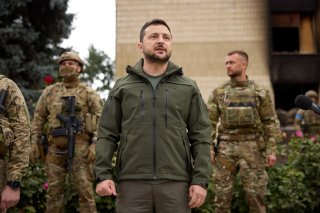 “Of course Ukrainian authorities will investigate this video,” Olha Stefanishyna, Ukraine’s deputy prime minister for European and Euro-Atlantic integration, said on the sidelines of a security forum in Halifax, Nova Scotia. Stefanishyna said, without providing further details, it is “very unlikely” that the footage shows what Moscow claims, according to CNBC.

The footage, which circulated on Russian-language Telegram channels and other social media platforms, seemingly shows Russian soldiers in Makiivka, a village in the eastern Luhansk region, lying down on the ground after surrendering to troops with yellow armbands. Ukrainian forces sometimes wear yellow to distinguish themselves on the battlefield, and the clip itself appears to have been filmed by a man with a yellow armband. The video footage cuts off with the sound of gunshots, followed by another snippet showing an aerial view of twelve dead Russian troops. An examination by the BBC of the events leading up to the image of the dead Russian soldiers appears to show a man, dressed in a different uniform, emerging from a nearby building and opening fire. The authenticity of the snippets has not been independently corroborated.

Russia’s Defense Ministry claimed the incident was an act of “intentional and methodical murder of more than ten immobilized Russian servicemen with direct shots to the head by the Ukrainian army's degenerates,” adding that it “cannot be portrayed as a ‘tragic exception’ by anyone amid the Kiev regime's allegedly universal observance of POW rights.”

“Ukrainian nationalists have leaked another video of their war crimes and committed atrocities,” tweeted Gennady Gatilov, Russia’s ambassador to the United Nations in Geneva. “This time the clip shows 10+ unarmed Russian servicemen surrendering at Makeevka, who were immediately executed at point-blank range.”

Stefanishyna insisted that Ukraine is “absolutely not interested” in executing Russian soldiers and that Ukrainian forces seek to take as many Russian prisoners of war (POWs) as possible so that they can be used in prisoner swaps with Russia. “Every potential executed Russian soldier is some Ukrainian that is not able to be exchanged, so the spirit and logic is not there,” she noted.

The UN’s Human Rights Monitoring Mission in Ukraine (HRMMU) said in a statement that it is “aware of the video and is looking into it,” according to the Associated Press. “We reiterate our call that all such allegations should be properly and promptly investigated by respective authorities.”