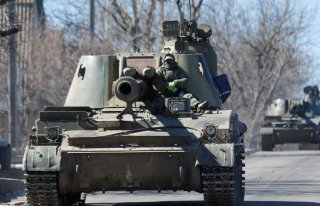 Officials of the Donetsk People’s Republic (DPR), the pro-Russian separatist territory in Ukraine’s eastern Donbass region, announced on Friday that they had suspended a moratorium on the death penalty—a move allowing the group to execute three foreign volunteers in Ukraine’s military on charges of mercenary activity for their participation in the Russo-Ukrainian War, according to Russia’s state-run RIA Novosti news outlet.

“In view of the need to protect the sovereignty, territorial integrity, and interests of the Donetsk People’s Republic in the current military-political situation, the draft law proposes to recognise part 9 of article 202 of the Penal Code as invalid,” said Elena Shishkina, chairman of the People’s Council Committee on Criminal and Administrative Legislation, referring to the statelet’s temporary moratorium on capital punishment.

The three men—Britons Aiden Aslin and Shaun Pinner and Moroccan Brahim Saadoun, who also claims Ukrainian citizenship—were convicted and sentenced to death in early June. Each of the men had been charged with, and pleaded guilty to, violating four articles of the Donetsk legal code, including attempting to “conduct terrorist activity” and plotting to “seize power” in the region. The three men have already filed cassation appeals against their sentences, according to RIA Novosti.

Because each of the men accepted payment from the Ukrainian government in exchange for their service, they were deemed to be “mercenaries” rather than legitimate enemy combatants, who enjoy protections under the Geneva Convention. This interpretation of international law has been widely criticized abroad, and several Western nations have expressly condemned the verdict as illegitimate.

The DPR, run from the eponymous city and former capital of Ukraine’s Donetsk province, has played a major role in Russia’s ongoing conflict with Ukraine. The breakaway region, along with the neighboring Luhansk People’s Republic (LPR), seceded from Ukraine in 2014, triggering an eight-year war with the central government in Kyiv. Although Russia initially recognized the Minsk Protocol, a negotiated agreement for resolving the Donbass conflict that called for the eventual return of the two territories to Ukraine, it repudiated the Minsk Protocol in February 2022 and recognized Donetsk and Luhansk’s independence. Within twenty-four hours of the recognition, it had dispatched “peacekeeping” troops to the two territories and, after claiming that they had been fired upon, invaded Ukraine.

Russia and Syria remain the only two countries to have recognized the two breakaway territories, with several historic Russian allies and clients, including Kazakhstan, expressly committing themselves to the Minsk Protocol and ruling out recognition.