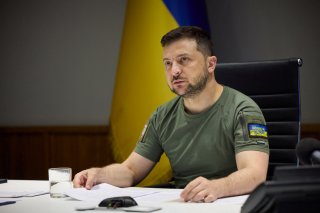 “There will no longer be relations between Ukraine and Syria,” Zelensky said in a video message on Telegram. The Ukrainian leader did not provide additional details on what the consequences of the move would be, such as when and whether Ukraine’s embassy in Damascus or Syria’s in Kyiv would be vacated.

“We will communicate with both countries to agree on frameworks for strengthening relations, including establishing diplomatic relations in accordance with established rule,” the official said. Following the announcement, it was unclear if and when the Syrian government intended to open formal diplomatic ties with the two breakaway republics.

Although the Donetsk and Luhansk People’s Republics have maintained de facto independence since 2014, neither had received official recognition from any United Nations member state until Russia recognized both in the run-up to its invasion in February. Russia’s decision to recognize the independence of the republics—a violation of the Minsk Protocol,” the negotiation framework agreed to be the basis for negotiations ending the Donbass conflict—came as a significant precursor step to the invasion. On the same day that Russia recognized the republics’ independence, it agreed to deploy “peacekeeping troops” into the area, then immediately claimed that they had been attacked, and proceeded with its broader military campaign.

The cordial relationship between Russia and Syria dates back to the time of the Soviet Union, which counted Syria as a major Middle Eastern client state. Russia’s intervention in the Syrian Civil War on the side of Assad is widely credited with keeping him in power, and Syria has returned the favor through close alignment with Russia’s foreign policy. Damascus has consistently voted with Russia at the United Nations—it was one of five nations to vote against a UN General Assembly resolution condemning the invasion—and as many as 40,000 Syrians volunteered to participate in the Russian invasion, although it is unclear how many were ultimately deployed.