Ukraine Puts Russia on the Defensive in Annexed Kherson 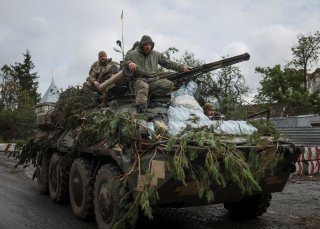 Kremlin officials confirmed on Monday that Ukrainian troops have captured several points on the southern Kherson region’s outskirts. “With numerically superior tank units in the direction of Zolota Balka and Oleksandrivka, the enemy managed to forge deep into our defenses,” Russian Defense Ministry spokesman Igor Konashenkov said during a briefing, adding that the Russian military was able to “inflict massive fire damage” on the advancing Ukrainian forces. Vladimir Saldo, the Russian-installed head of Kherson, told reporters on Monday that the Ukrainian military has taken control of Dudchany, a settlement on the Dnieper river that sits about thirty miles south from where the front lines were a day earlier.

Still, Russian and local Russian-aligned officials have rejected claims of sustained Ukrainian battlefield success in the Kherson region. "They made a breakthrough attempt and moved forward along the Dnieper. All these attempts are being crushed and the enemy’s forces are being bombarded. They moved forward and were destroyed there. They only managed to make photos. That was the end of it and there is no further advance," Kirill Stremousov, deputy head of Kherson’s military-civilian administration, told Russian media, according to state news outlet TASS.

The southern Kherson region was captured by Russian forces in the early stages of the Ukraine invasion. Control over Kherson provides Russia with a secure land bridge to annexed Crimea and gives the Russian military a staging post for future offensives in the Mykolaiv-Odessa axis.

Ukraine’s successful advances come on the heels of the Kremlin’s decision to annex Kherson, along with three other regions—Zaporizhzhia, Donetsk, and Luhansk—following five days of referendum voting denounced by Kyiv and the West as illegal and illegitimate. The move obliges Moscow, which recently announced a partial mobilization drive to call up as many as 300,000 qualified reservists, to defend Kherson as its own sovereign territory.

A senior Pentagon official said on Monday that Russia is in a “defensive crouch” in Kherson. "Down in the Kherson region where Ukraine is conducting their counter-offensive … the Russians essentially are in a defensive crouch. They are fighting, obviously. But they're in a defensive crouch, as opposed to further north up near Bakhmut where it's more offensive in nature,” the official said, referring to unconfirmed reports of Russian advances near the major eastern city of Bakhmut in the Donetsk region.