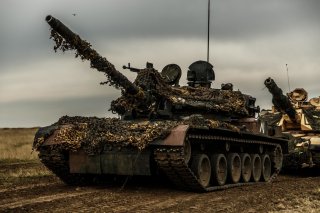 As the Russians shift their war aims to the Donbas after failing to storm Kyiv and conquer Ukraine outright, the Western alliance has been presented with a historic opportunity to arrive at a political settlement on Ukraine and the future of Europe. In order to accomplish this, the United States and its European allies will need to recognize that their policies toward Russia and Ukraine have been a manifest failure in preventing or deterring conflict, their reliance on sanctions and punitive measures toward Russia has not changed Putin’s calculus, and that NATO’s continued expansion is not in their interests.

The Russian invasion of Ukraine has revealed two key lessons that bear closer examination by the Western alliance. The first is that Russia, which has militarily stumbled in Ukraine, does not pose the looming threat to Europe that was once assumed. The second is that an over-reliance on sanctions and diplomatic isolation by the United States and its European allies failed to deter Russia from invading Ukraine in the first place. These same policy options are likely to have the same non-effect in persuading the Russians to withdraw from Ukraine or achieve any resolution of tensions and conflicts in the former Soviet space. Thus, NATO and the United States will need to adopt a different tack on the purpose and future of the Western alliance beyond endless expansion to ever more distant countries.

Controversies and concerns over NATO’s expansion into eastern Europe have abounded since the immediate aftermath of the Soviet collapse. George Kennan warned NATO expansion would be the “most fateful error of American policy” after the Cold War and predicted it would “inflame the nationalistic, anti-Western and militaristic tendencies in Russian opinion” while having “an adverse effect on the development of Russian democracy.” Ultimately, after decades of political repression and economic stagnation under Soviet-backed communist regimes, most of the newly independent countries of eastern Europe joined NATO. As NATO expanded into the former Soviet empire, a series of conflicts erupted that focused the Kremlin’s attention on the newly established Russian Federation’s fragility and insecurity. The first erupted at home in 1993 as President Boris Yeltsin struggled to establish his authority in the face of communist attempts to oust him—culminating in the military’s storming of the opposition-controlled parliament.

Then, just as Russia teetered on the brink of civil war, Yugoslavia disintegrated in a series of conflicts that involved NATO’s first involvement in armed conflict in the former communist bloc. The Russians viewed with shock and trepidation the potential precedent set by the violent dissolution of another multinational state that had also been ruled by a communist regime.

During this same period, Islamist-inspired insurgencies emerged in Chechnya, a “constituent republic” of the Russian Federation, which involved terrorist campaigns against Russian civilians. U.S. officials referred to Islamist militants as “separatists” while U.S. secretary of state Madeleine Albright warned the Kremlin that they “could not consider this war simply an internal affair.” These same separatists went on to mastermind numerous terrorist attacks in Russia including the Dubrovka Theater hostage crisis in 2002 and the Beslan school massacre in 2004. In the aftermath of Beslan, Putin bitterly remarked in a public address “we demonstrated weakness and the weak are beaten. Some want to tear off a big chunk of the country. Others help them to do it.” He complained that he had received inadequate support from the United States for his campaign against the Chechen insurgency even as the Americans engaged in their own bloody and protracted confrontation with Islamist terrorism after September 11, 2001.

It was in the backdrop of these destabilizing threats to the newly established Russian Federation that the conflicts in Georgia and Ukraine, to whom NATO promised membership, started to emerge. It would not be implausible to suggest that the Kremlin had little confidence in the assurances or outright dismissals provided by Western leaders about Russian insecurity about NATO expansion. Nor would it be implausible to suggest that neither the United States nor its European allies have any real desire or intention to go to war with Russia over territories as distant as the Donbas or countries as remote and relatively inaccessible as the Caucuses. Putting aside the “principled” case for expanding NATO’s defense commitments into a febrile region that neighbors an insecure but assertive nuclear-armed country, what strategic purpose is served by NATO expansion into these increasingly “Balkanized” territories? Further, what tools do the United States and its European allies intend to use to deter hostile responses by Russia?

Prior to the invasion of Ukraine, the standard response by the Western alliance towards Russia had been an endless series of sanctions and strongly-worded statements that ultimately failed to have any deterrent effect. Instead, sanctions produced structural changes in the Russian economy that have resulted in a shrinking private sector that is increasingly crowded out by state power. As both oligarchs and ordinary citizens find themselves squeezed between the twin pressures of Western sanctions and the Kremlin’s own predatory attitude towards free enterprise and private property, Vladimir Putin has only been able to increase his leverage and influence over Russian elites.

Sanctions yielded zero progress in reversing or halting Russian moves in Ukraine while being consistently undermined by European energy politics. This primarily punitive approach also did not provide for any “off-ramp” for potential de-escalation. Instead, Russia’s invasion of Ukraine only confirmed that sanctions failed as a policy tool to deter any Russian aggression in Ukraine.

As it stands, present U.S. and NATO policy continue to demand for nothing less than Russia’s unconditional surrender and withdrawal, with the further implication that the Kremlin should simply drop any further objection to NATO expansion.

There are two main options now for the United States and NATO. The first is to maintain the present punitive policy in which mostly Western countries punish Russia with little to no forethought to what escalation would look like beyond a final and decisive defeat of Russian forces in Ukraine. Another option would be to balance sanctions policy with a set of clearly articulated and limited objectives that do not amount to calling for Russia’s unconditional surrender and withdrawal from Ukraine. These objectives could be complemented with a series of laddered incentives in return for specific steps the Russians could undertake to de-escalate conflict in Ukraine while providing opportunities for Putin to “save face.” These objectives and incentives could begin with gradual Russian re-entrenchment from Ukraine in return for Kyiv granting autonomous powers to the border provinces of Ukraine that experienced unrest and insurgency. This could be followed up with the promise of lifting sanctions in return for Russian re-recognition of Ukrainian sovereignty that is based on neutrality and regional autonomy rather than being divided into adversarial blocs. Finally, the United States and NATO could offer Russia a new pact that is analogous to the 1975 Helsinki Act between the United States and the Soviet Union whereby the existing geopolitical status quo in eastern Europe is left in place.

All these measures would still have to be complemented with a strong deterrence that does not rely primarily on increasingly ineffectual threats of sanctions and diplomatic isolation but on the understanding that, like Putin, NATO too has “red lines.” But these “red lines” should end where NATO’s borders end. And to that end, NATO should focus on consolidating the defense of its existing “frontline” member states rather than continuously seeking to expand.

This is how the United States and NATO could meet Russia “halfway.” Putin’s demands that NATO withdraw troops or missiles from existing member states in eastern Europe should be resisted given the alliance’s standing commitments. However, limiting NATO expansion is a more reasonable and feasible objective that is in both NATO and Russia’s common interests. It is not in the interest of the United States and its allies to indefinitely extend their security commitments to countries that produce more risk than any clear geostrategic advantage. The criteria for NATO membership should neither be expansion for its own sake nor a demonstration of “values” that the alliance supposedly represents by endlessly extending its defense perimeter.

The common objection to those who criticize NATO’s expansion is that the aspirant countries are sovereign states with the right to choose their own associations and alignments. The most immediate problem with this line of argument is that it does not account for the practical realities of credibly and effectively defending these countries when conflict erupts. The United States and its European allies have taken unprecedented steps to arm Ukrainians against Russian aggression—after the fact—but has that stopped the war? Will arming Ukrainians and sanctioning Russians return all the seized or disputed territories back to the government in Kyiv?

Is NATO prepared to go to war with a nuclear-armed, former superpower over territories that are marginal at best to U.S. and NATO interests? If this is not the case, then NATO’s credibility on upholding its collective defense—and therefore its very raison d’être—is at risk. Deterrence requires the ability and the political will to use force and escalate to the point of direct armed conflict. Any policy or posture that falls short of that is a lethally irresponsible bluff at best. A more recent criticism that might be leveled would be the moral imperative to hold Putin accountable for war crimes and atrocities committed by Russian forces in Ukraine. Again, one must consider how the United States and NATO would achieve that apart from public denunciation and perpetual sanctioning—neither of which will bring the tragedy in Ukraine any closer to an end.