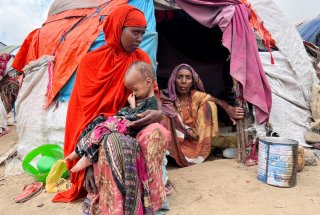 The United Nations (UN) announced on Tuesday that it needed $2 billion to fully address the growing humanitarian crisis in Somalia, which it claimed faced its most significant famine in fifty years amid crop failures and rising global grain prices.

“Things are bad and every sign indicates that they are going to get worse,” James Elder, a spokesman for the United Nations Children’s Fund (UNICEF), told reporters in a video call from Somalia on Tuesday. “Without greater action and investment, we are facing the death of children on a scale not seen in half a century.”

Elder noted that the Somali government’s official figures showed that 44,000 children had been admitted to Somali hospitals and clinics in August due to severe malnutrition, a rate of more than one child per minute throughout the entire month. Malnutrition is itself dangerous, but it also significantly contributes to deaths from other widespread illnesses such as measles or malaria.

Somalia has experienced significant food shortages since 2020 when insufficient rainfall led to widespread crop losses in the largely subsistence-based country. Since 2020, the rainy season has failed three more times, and the Russian invasion of Ukraine led to skyrocketing food prices, making large-scale imports impossible without substantial foreign assistance. Roughly 7.8 million Somalis are affected by the drought, and the UN estimates that around 200,000 are at severe risk of famine.

“When people speak of the crisis facing Somalia today, it has become common for … comparisons to be made with the famine of 2011, when 260,000 people died,” Elder said. “However, everything I am hearing on the ground—from nutritionists to pastoralists—is that things today actually look worse.” He noted that only half as many people were ultimately affected by the 2011 famine, and weather conditions had improved over time.

Jens Laerke, a spokesman for the UN’s Office for the Coordination of Humanitarian Affairs (OCHA), noted on Tuesday that the organization’s funding needs to address the crisis in Somalia had escalated as local conditions had deteriorated. In January, OCHA estimated it needed $1.46 billion to address the needs of 5.5 million people; by October, Laerke indicated that the estimate had been revised upward to $2.26 billion, targeting 7.6 million people.

“Famine is projected in [the] Baidoa and Burhakaba districts in [the southern] Bay region between this month and December if humanitarian assistance does not reach people most in need,” Laerke said, adding that less than half of the needed funding had been secured.