United Nations Sounds Alarm Over Risk of Famine in Somalia 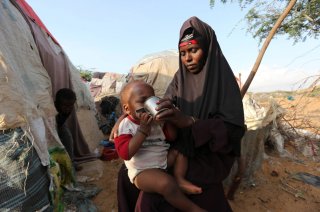 More than 200,000 Somalis are thought to be at risk of starvation in the coming year as the country’s drought worsens and food prices continue to increase, according to the United Nations.

The international organization reported on Monday that Somalia’s lack of spring rains and projected short rainy season are likely to lead to a further decline in the country’s agricultural sector, which consists almost entirely of subsistence farming. Somalia’s shortfall in rain over the past spring was the fourth deficient rainy season in a row, leading to significant impacts on the poor East African country’s ability to feed its people.

Somalia’s ability to import the shortfall in its food supply has also been impacted by the ongoing Russian invasion of Ukraine, which has negatively affected grain exports from both countries. Russia and Ukraine together accounted for roughly one-third of the world’s wheat exports prior to the onset of the invasion in late February. The UN World Food Programme (WFP) has estimated that 213,000 Somalis could starve without external aid—an increase of nearly 300 percent from the WFP’s projections as recently as April.

The UN statement went on to say that 7.1 million Somalis, or slightly under half the country’s population of 15 million, face “acute” levels of food insecurity, meaning that they are expected to obtain the bare minimum number of calories for survival and any disruptions could push them into danger of starvation.

“We must act immediately to prevent a humanitarian catastrophe,” El-Khidir Daloum, the WFP’s director for Somalia, said in a statement. “The lives of the most vulnerable are already at risk from malnutrition and hunger; we cannot wait for a declaration of famine to act.”

The WFP has estimated that as many as three million animals, mostly livestock, have died in Somalia due to the ongoing drought. This development has pushed many Somalis deeper into poverty, as many are reliant on pastoralism for their livelihoods.

Somalia’s ongoing food problems are made worse by the country’s instability, including the insurgency led by the al-Shabaab Islamist militant group in the country’s south. Jihadist activity has made it difficult for international aid workers to access areas at risk of famine, particularly south of Mogadishu, Somalia’s capital.

It is estimated that during Somalia’s last period of famine in 2011, at least 250,000 Somalis died from starvation or complications from hunger—half of whom were young children.