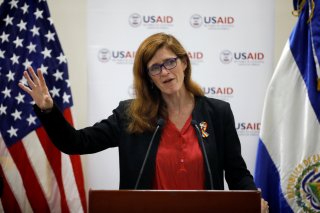 The U.S. Agency for International Development, or USAID, announced on Wednesday that it would provide $488 million in humanitarian aid for Ethiopia to respond to the country’s four-year drought, which has devastated the country’s agricultural sector and pushed millions of Ethiopians to the brink of starvation.

The USAID funding covers the cost of food supplies, including sorghum, peas, and vegetable oil, according to a statement released by the group. The aid package is intended to target an estimated 7.4 million people in need of immediate assistance, as well as 4.7 million children at acute risk of malnutrition; the two groups together account for roughly ten percent of Ethiopia’s population before the start of the country’s civil war in late 2020.

“Communities across southern and southeastern Ethiopia are experiencing the worst effects of the four back-to-back drought seasons,” the agency noted. “Farmers are experiencing widespread crop losses and 2.5 million livestock deaths have been reported—a significant loss in sources of food and income.”

The agency also noted that access to food and income had been negatively affected by Ethiopia’s ongoing war in its northern Tigray region, leading to a regional refugee crisis and eating up resources that could otherwise be devoted to famine relief. It also observed that Russia’s “unprovoked and unjustified” invasion of Ukraine had raised global grain prices and prevented exports of Ukrainian and Russian wheat to Africa, further exacerbating the continent’s food shortages. USAID’s announcement comes during Russian foreign minister Sergey Lavrov’s tour of Africa, in which the Russian diplomat has attempted to convince regional leaders that the food shortages are a product of Western sanctions on Russia rather than the natural consequence of a war in one of the world’s most productive agricultural regions.

The United States has historically regarded Ethiopia as a strategic partner but withdrew its security and economic assistance in May 2021 over concerns regarding the conduct of Prime Minister Abiy Ahmed in the Tigray War. However, Washington has continued to offer humanitarian aid to Addis Ababa, mostly through USAID.

USAID’s assistance to Ethiopia comes roughly one week after the agency announced a similar aid package of $476 million to Somalia, which has been similarly affected by the region’s unprecedented drought. USAID Administrator Samantha Power claimed that Washington would spend as much as $1.3 billion to address populations at risk of starvation in East Africa.