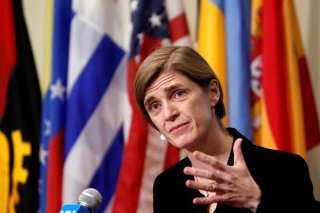 Once the Senate confirms Samantha Power as the next administrator of the U.S. Agency for International Development (USAID), she’ll have a huge task ahead of her.

As she prepares to take the reins—and assume control of USAID’s growing, multi-billion dollar foreign aid budget—the question is, can she continue the lead taken by the last administration in promoting religious freedom?

Don’t count on it. Lower-level political appointees from the Biden administration already in place at USAID are reported to have dismantled the genocide response and atrocity prevention mechanisms put into place under President Donald Trump, as well as the overarching International Religious Freedom apparatus.

Congress and previous U.S. administrations of both parties have emphasized the importance of advancing international religious freedom as a vital component of a successful U.S. foreign policy. Given that USAID will have a seat on the National Security Council, will Power agree that the promotion of religious freedom and programs to develop greater religious tolerance will enhance U.S. foreign policy objectives?

True, Power has been a prominent advocate of the protection of victims of genocide. But her record inspires little confidence. A former envoy to the United Nations during the Obama administration, Power is perhaps best known as one of the champions of the disastrous “leading from behind” U.S. military intervention in Libya in 2011.

Under the previous administration, Mark Green, the former administrator directed USAID to play a significant role to assist victims of genocide and religious atrocities, for example, Yazidis and Christians in Northern Iraq, as well as the Rohingya communities in Burma that were forced to flee to Bangladesh. In his remarks at the 2019 Ministerial on Advancing International Religious Freedom hosted by the State Department, Ambassador Green recalled a visit to a USAID-funded center run in Jordan that provides training to Iraqi Christian refugees who fled their homes in Northern Iraq to escape ISIS's genocide. In gratitude, those Iraqi refugees presented Green with a mosaic they made in gratitude for USAID support.

Under the last administration, USAID expanded its funding and programming to work with other governments to highlight and provide outreach programs to faith-based communities to ensure their inclusion among recipients of U.S. assistance, to expand USAID’s partnerships with faith-based organizations, and to fund them as new and previously underutilized partners. Will the new USAID administrator continue the U.S. commitment to fund assistance to advance international religious freedom through USAID’s programs?

In particular, will Power continue the last administration’s direct funding of and partnerships with local faith leaders, churches, mosques, synagogues, and other houses of worship in order to benefit directly these communities on the local level? That direct funding cut off many of the foreign aid “beltway bandits” and was consequently much more effective than their expensive and grandiose projects.

The Biden administration’s political appointees already at USAID have halted an Uyghur Cultural Preservation Project in Central Asia, the only U.S. government program to support that community. Will Power reverse that mistake?

The bipartisan U.S. Commission on International Religious Freedom (USCIRF) applauded former Secretary of State Mike Pompeo’s designation of Nigeria as a Country of Particular Concern. However, two days after President Joe Biden took office, USAID rejected a $2 million program to assist churches and local faith-based organizations in Nigeria that were to have documented ongoing atrocities being committed against both Christians and Muslims by, among others, the notorious Boko Haram, the Islamic State in West Africa, and other Islamic jihadist extremists.

This program would have been funded through USAID’s Local Works Program, which was established by Sen. Pat Leahy (D-Vt.) and specifically designed to fund such projects. Will Power also reverse that decision and commit USAID to leading the effort to fund local faith-based groups?

U.S. foreign aid aimed at establishing and promoting religious freedom is particularly important with the rise in recent years of religious tensions, conflicts, genocide, atrocities and discrimination against religious communities. Tamping down those tensions is as important as any other type of U.S. assistance. The question is, will Power lead from the front to maintain it?

James M. Roberts is a research fellow for Economic Freedom and Growth in the Center for International Trade and Economics at The Heritage Foundation.