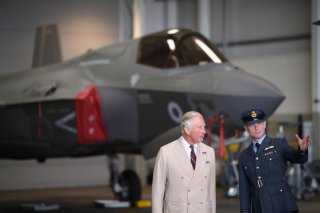 The United Kingdom’s F-35s will be equipped with a small but powerful new surface-to-ground missile in the near future: the Spear 3 missile, manufactured by MBDA, a European arms manufacturer, stands for Selective Precision Effects At Range and hints at the missile’s unique capabilities.

In an announcement posted to the MDBA website, the company elaborated on the details of the £550 million ($747 million) deal with the UK Ministry of Defense, stating “SPEAR will be the main medium-to-long-range strike weapon of the UK F-35 combat aircraft, enabling them to defeat challenging targets such as mobile long-range air defence systems at over-the-horizon ranges in all weathers and in highly contested environments.”

Here’s what makes the missile so deadly.

The missile itself is a stand-off weapon that is relatively small, about two meters, or six feet in length, and lightly tipping the scales at around one hundred kilos, or about twenty-two pounds. MBDA advertises the missile as efficient and cost-effective, and thanks to the missile's small payload size and relatively low explosive power, MBDA claims that collateral damage is significantly minimized.

Thanks to the Spear’s pop-out wings, the stand-off missile has a range of about 140 kilometers, or 87 miles. Given the missile’s diminutive size, it can be carried on pylons in packs of up to three, affording a higher total number of munitions per pylon.

As of now, the Spear is compatible only with the F-35B, the short take-off and vertical-landing variant of the F-35 stealth fighter family, though that is likely to change in the future. In addition to eight internally-carried Spear missiles, the F-35 could carry at least six more missiles externally on underwing pylons, though at the cost of significantly degraded stealth capabilities. MBDA artwork also shows Eurofighter Typhoons outfitted with a whopping sixteen Spear missiles in addition to external fuel tanks and additional air-to-air missiles.

Artwork released by the company shows multiple Spear missiles being released simultaneously, a nod to the interconnected and networked nature of the missile. The Spear will use both a GPS as well as an inertial navigation system and a multimode seeker to lock onto targets.

Though the Spear missile is not yet ready for service, the seven-year deal struck with the Ministry of Defense covers additional weapon testing and integration onto British aircraft that, if adhered to, will see the first missiles built sometime in 2023. In the meantime, the Ministry of Defense is quietly sharpening its spears.