The U.S. and U.K. Have a Special (Missile) Relationship 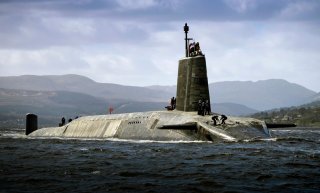 The Trident family of missiles was originally developed in the late 1980s at the tail-end of the Cold War. It entered service with the United States in 1990 and with the United Kingdom in 1994. Although each missile is capable of carrying up to twelve re-entry vehicles, the New START treaty caps this number at eight.

Trident missiles have been steadily improved nearly as soon as they entered service. In 1994, an earth penetrating version was developed that could eliminate hardened, underground targets. In 1998, Tridents were given an optionally-equipped air burst fuse, presumably for non-tactical scenarios where maximum destructive power would be ideal.

Though the Trident missile system was intended to be retired by the United States in the late 2020s, 300 Tridents are currently being upgraded, which will allow them to remain in service with both the United States and the United Kingdom until at least 2042.

Nuclear missiles get a lot of attention. Here’s something conventionally explosive:

In the aftermath of NATO’s 1999 involvement in Kosovo, a missile capability gap was observed. United Kingdom forces struggled at times to carry out strikes against mobile and time-sensitive targets. The Spear 3 was developed to fill this gap.

The Spear 3 also has stand-off capabilities, and is intended to be launched at ground targets at safe distance away from advanced anti-aircraft and air defense systems, especially those used by Russia. To that end, the Spear 3 has wings that deploy after launch, giving the missile a 140 plus kilometer range, or nearly 90 miles.

It is domestically-designed in the UK and specifically intended for use with the American F-35B Lightning II stealth fighter. The F-35 can carry the Spear 3 internally in the weapons bay, or under the wings on two external hard points, though carrying missiles outside the weapons bay would greatly degrade the F-35’s stealth characteristics.

One of the considerations that was prioritized during the design process was missile robustness. The missile is insensitive to external factors that could cause it’s trajectory to deviate or the missile to explode, like bullet strikes or extreme heat or cold. It can be “deployed against many targets and be specifically tailored to achieve its desired effect based on mission-specific details in real-time.”

There is no denying the U.S.-UK Special Relationship, which is very apparent when looking at the missile development and interoperability between the two countries. Trident missiles equip American and British submarines, and the UK developed munitions specifically for their American-bought stealth fighter-jets—a friendship for the ages.