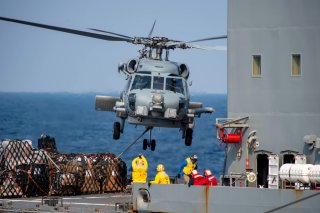 India and the United States, who share concerns over an increasingly muscular China, are mulling options to revamp the U.S. Military Sealift Command (MSC) ships that are currently stationed at shipyards in India.

“To further enhance defense industrial cooperation in the naval sector, both sides agreed to explore possibilities of utilizing the Indian shipyards for repair and maintenance of ships of the U.S. Maritime Sealift Command (MSC) to support mid-voyage repair of U.S. Naval ships,” the U.S. Department of State explained in an announcement.

The announcement comes on the heels of a meeting held between Secretary of State Antony Blinken, Secretary of Defense Lloyd Austin, and their Indian counterparts.

Speaking to USNI News, Sal Mercogliano, a naval and maritime historian, noted that the U.S. Military Sealift Command “currently uses yards in the Middle East and Singapore so India would be an ideal supplement.”

Mercogliano added that the U.S. MSC is “dealing with lack of yard availability so the addition of India would be a great advantage for U.S. forces in the Indo-Pacom area.”

Both India and the United States would like to leverage each other’s supply chains and industrial bases. “Both sides would explore and further promote the means to encourage reciprocal participation of U.S. and Indian vendors in each other’s defense supply chains,” the State Department explained.

The announcement added that “acknowledging India’s focus on developing its domestic capabilities and helping to ensure reliable defense supplies, the Ministers committed to work closely across their respective governments on co-production, co-development, cooperative testing of advanced systems, investment promotion, and the development of Maintenance Repair and Overhaul (MRO) facilities in India.”

A Threat in the East

China’s increasingly bellicose rhetoric and military buildup have caused concern for both the United States and India, as well as other countries in the region.

Australia and Japan have joined the United States and India in forming the Quadrilateral Security Dialogue, also known as the Quad, a strategic security dialogue group that addresses the countries’ security concerns in the Pacific region.

New Delhi is an important arms importer for both the United States and Russia. And while India operates several Soviet-era Kilo-class attack submarines, the country also operates a number of American naval aircraft, including Sikorsky-built MH-60R helicopters and P-8I Poseidon maritime surveillance aircraft.

With the revamp of the U.S. Military Sealift Command and the linking of both New Delhi and Washington’s supply chains and industrial bases, both countries send a strong signal of unity in the face of growing geopolitical challenges in the Pacific.