The United States Claims Russia is Converting Submarine Missiles for Ground Launch. Why? To Get Around a Treaty. 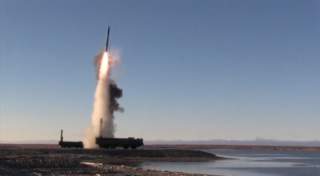 When asked what the United States would do if Russia continued to develop missiles in violation of the INF treaty, the former senator from Texas said:

“…at that point we would then be looking at a capability to take out a missile that could hit any of our countries in Europe and hit America in Alaska.”

“Take out” in this context could be interpreted in two very different ways: shooting down the missiles in the air before they hit their target, or destroying them on the ground—preemptively. The representative also mistakenly alluded to a Russian medium-range ballistic missile, but the weapon in question was, in fact, a ground-skimming cruise missile.

Hutchison’s remarks triggered a media firestorm because she appeared to threaten preemptive war with Russia. Hours later, Hutchison clarified in a tweet “I was not talking about preemptively striking Russia. My point: Russia needs to return to INF Treaty compliance or we will need to match its capabilities to protect US & NATO interests.”

Moscow replied only mildly to Hutchison’s comments and has never denied very strongly that it is violating the INF treaty.

The importance of banning ground-launched intermediate range weapons (per the treaty, with a range between 310 and 3,420 miles) is understandably not very intuitive to the public. You can read a longer explanation here, but the heart of the matter is that ground-launched intermediate-range ballistic and cruise missiles could be launched so promptly—and traverse the distance to their targets so quickly—that an adversary facing an attack by them was left with too little time to respond with anything other than a full nuclear broadside in return.

The INF treaty signed in December 1987 led to the decommissioning of nearly 2,700 Russian and U.S. nuclear weapons but did not regulate other means of apocalyptic nuclear warfare, such as sea or air-launched missiles, or longer-range intercontinental ballistic missiles. The treaty was not about making nuclear war impossible, just removing a destabilizing class of weapons that threatened to make it more likely. As it led to the removal of entire classes of weapons from services, it also spared both states from spending billions of dollars developing them.

By 2007, however, Putin stated that the INF treaty was no longer in Russia’s interest. The treaty strictly applies to Russia and the United States, but Asia now harbors many states with large IRBM arsenals.

Russia has also leveled a flurry of unconvincing claims that the United States is violating the INF treaty. One claim is that armed drones like the Predator or Reaper actually count as a form of cruise missile. Another claim is that dummy rockets shot down in tests of America’s ballistic missile defense systems violate the treaty. Finally, Moscow argues that the Aegis Ashore missile defense system based in Poland and Romania is in violation because it uses a launcher originally developed for nuclear-capable Tomahawk missiles—though Aegis Ashore itself is only designed to shoot down missiles.

It’s not untrue that these could be converted to nuclear delivery platforms, but doing so on a large scale covertly would be impractical. It would also require controversial international permissions.

The Novator 9M729 (codenamed the SSC-8 Screwdriver by NATO) traces its origins to a submarine-launched cruise missile with a range in between 1,000 and 1,500 miles first deployed near the end of the Cold War. It is closely related to the Kalibr family of cruise missiles, which Russian warships and submarines have extensively combat tested in Syria. Russia has also developed an export variant called the Klub with range cut to 300 miles to comply with the Missile Technology Control Regime.

The United States began complaining vaguely that Russia was testing unspecified weapons in violation of the INF treaty by 2013, though testing apparently began way back in 2008.

The truck-borne launcher of what appeared to be a 9M729 missile was the Iskander ground-based tactical missile system, which normally hurls a short-range (max 300 miles) ballistic missiles arcing up into space before plunging down on their targets approaching six times the speed of sound.

The 9M729 was meant to be an alternate cruise-missile type weapon for the Iskander. As long as this adhered to the range restriction for ground-launched weapons, this too would be in compliance. However, in 2015 arms control expert Jeffrey Lewis posted a side-by-side photo analysis of images of the ground-launched 9M729 missile highlighting its near-identical appearance to the SS-C-8.

If the weapon is virtually identical to the earlier submarine-launched weapon, then it would possess a similar range, making the ground-launched version in violation of the INF treaty. Washington finally confirmed it was concerned specifically with the SS-C-8 in 2017.

The same year, the New York Times reported that Russia operates two battalions with four launchers of the Iskander-K variant—each equipped with a half-dozen of the long-range nuclear-tipped cruise missiles. Particularly troubling is that if the Iskander is shown to be capable of launching long-range missiles, then the INF treaty stipulates that all Iskander launchers should be banned. As the missile system occupies a major role in Russia’s military strategy, it is highly unlikely Moscow would accede to withdrawing it from service.

At this point, the INF treaty is clearly ailing, and Moscow doesn't seem invested in saving it unless it is renegotiated with new parameters. Undeniably, some of the INF treaty rules are arbitrary and could be adjusted to reflect the evolving security environment. However, incorporating more countries into it a hypothetical INF-2 would prove difficult as IRBMs play an important role in the nuclear capabilities of China, India, Pakistan and Israel.

The United States could certainly develop stronger anti-cruise missile defenses, having already invested heavily in a limited anti-ballistic missile capability. But such measures have historically only fed Russian paranoia.

If the INF treaty ends up falling apart entirely, the Pentagon will likely invest billions of dollars in ground-launched cruise missiles and intermediate-range ballistic missiles with which to match Russian capabilities—if it can persuade countries in European states to host them, which was a controversial move even during the Cold War. Already, at the Trump administration’s request, the Pentagon is floating a number of non-INF compliant concepts for systems such as its M270 rocket launcher, as well as looking into reinvesting in smaller, tactical nuclear weapons.

However, renewing a ground-based missile arms races means reinforcing a destabilizing dynamic of mutually assured destruction that will not make Europe anymore secure, as Russia is already the weaker party in a conventional military conflict.

Washington and Moscow will need to communicate clearly with each other if the INF treaty is to be preserved for the benefit of future generations in both countries and throughout Europe.