Going Ballistic: A Key Missile Treaty Between Russia and America Is Dying a Slow Death 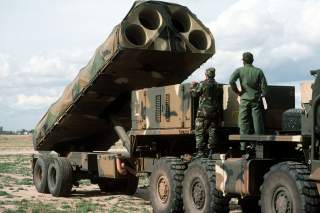 One of the arms-control treaties that is little understood is the Intermediate-Range Nuclear Force treaty signed by the Soviet Union and United States in 1987, which was later modified to incorporate Russia, Belarus, Ukraine and Kazakhstan. Actually, this treaty not only banned Intermediate Range Ballistic Missiles (IRBMs)—but also many short-range types and ground-based cruise missiles. But why get excited about banning the shorter-range weapons when the heavier missiles are still capable of laying waste to nations?

Most discussion of nuclear missiles focus on the huge Intercontinental Ballistic Missile, which are stored in fixed underground silos and can travel across oceans to hit targets across the globe. Modern ICBMs carry multiple independent warheads to lower the probability of interception and rain destruction on multiple targets with one rocket. It must be stressed that even a strike by even a modest number of ICBMs would kill millions and reduce any nation to an irradiated ruin.

One the opposite end of the spectrum, there are highly mobile and concealable, Tactical or Short-Range ballistic missiles mounted on trucks with a range measured in the low hundreds of miles and much smaller nuclear warheads. While even those could wreck the day of any city it landed on if it happened to be within range, these systems are primarily intended for targeting opposing military targets such as air bases, fuel dumps and missile sites. Because of they are mobile and can be fired quickly, they are surprisingly difficult to track and destroy.

Obviously, intermediate or medium-range missile fall in between, with a range in the “low” thousands of miles—but most importantly they are likely to possess the heavier, city-destroying warheads approaching the size of those in an ICBM as well as the mobility and fast launch time of short-range systems.

During the 1970s, NATO was spooked by the Soviet Union’s development of the RSD-10 “Pioneer” (designated by NATO the SS-20 Saber), each of which could deploy three 120-kiloton warheads on targets up to three to five thousand miles away depending on model. Unlike its liquid-fuel predecessors, the SS-20 used solid fuel, meaning it could be fired on short notice because it did not have to be gassed up prior to launch. It also possessed a high enough degree of accuracy that it could be used take out hardened military military targets, such as NATO’s own tactical nuclear forces.

So, in addition to the apocalyptic city-destroying ICBMs to deter attack, the Soviet Union appeared to have an effective weapon for defeating NATO’s ground armies, and their tactical nukes, without resorting to strategic nuclear warfare.

At a 1979 conference in Brussels, the NATO countries decided to retaliate by deploying over a hundred new Pershing II IRBMs to Europe, and four hundred nuclear-tipped variants of the Tomahawk ground-launched cruise missile (GLCMS). Unlike a ballistic missile, which shoots up into space in an arc traveling while many times the speed of sound, smaller cruise missiles skim low over the surface of the planet, are more capable of course corrections and are more precise. Furthermore, most long-range cruise missiles like the Tomahawk, travel no faster than an airliner.

Thus, both Washington and Moscow were left feeling increasingly discomfited from having to engage in a new middle-tier nuclear arms race and the buildup of apocalyptic weapons in Europe that could be launched on such short notice that escalation to nuclear warfare could happen before either side understood what was happening. It seemed not enough that both powers already possessed the long-range missiles to reduce each other’s civilizations to radioactive ashes, it seemed they were doomed to invest fortunes in replicating that ability many times over with the shorter-range missiles.

Between 1981 through 1983, Moscow and Washington tried to work out an agreement to mutually cut back on the intermediate-range weaponry in the early 1980s, but the United States was unwilling to cancel deployment of the new weapons it intended to achieve parity with Soviet IRBMs, and compromise was complicated by the fact the SS-20 remained relatively more effective than the more numerous Western GLCMs. However, when Mikhail Gorbachev took office in 1985 he was open to a more ambitious agreement.

With significant assistance from Margaret Thatcher and later Helmut Kohl, President Reagan and Gorbachev finally met in a decisive summit in Reykjavik in October 1986 and agreed in theory to institute a total ban on ground-launched ballistic missiles and cruise missiles with a range between 310 to 3,410 miles—to be verified by giving inspectors access to each other’s arsenals. The treaty was finally signed in December 1987.

The new policy had a sweeping effect: by June 1991, nearly 2,700 nuclear weapons had been destroyed, and several entire classes of weapons vanished entirely from Russian and American arsenals.

Nonetheless, it’s also important to understand which types of weapons were not affected by the INF. “Tactical” ballistic missiles like the Scud or Tochka, with a range under three hundred miles remained unregulated. So were air-launched cruise missiles, such as the AGM-86s carried by the B-52, and sea-launched cruise missiles like the Tomahawks carried by U.S. missile destroyers, cruisers and Ohio-class SSGN submarines. Arguably the most unstoppable form of nuclear attack, submarine-launched ballistic missiles, were unaffected.

Basically, the INF treaty helped remove a class of weapon that made rapid escalation into nuclear conflict more likely, but didn’t change the fact that nuclear conflict would lead to mutual annihilation.

The INF treaty also didn’t apply to countries other than the U.S. and Soviet successor states. France and the UK, which both maintain a few hundred nukes, were also unaffected. China’s small nuclear arsenal today still consists mostly of IRBMs, as its chief potential adversaries are well within their striking range.

However, in the last decade Moscow has increasingly begun to complain about the INF treaty—and explored loopholes to get around it. In 2007, Putin declared the INF treaty was no longer in Russia’s interest. One complaint is of course that China isn’t bound by it, and probably wouldn’t be interested in joining in. This is less vexing for the U.S. because North America doesn’t lie within IRBM range of China, but Russia shares a border with China—though Russian IRBMs would also be useful against Europe.

Moscow has dubiously alleged that Washington is violating the treaty with claims that armed drones should really count as cruise missiles (though a nuclear payload is certainly possible, none of appear to be so configured), or that a ground-based missile-defense system designed to protect against Russian missiles is in violation because its Mark 41 Vertical Launch System was originally designed to carry Tomahawks on U.S. ships.

By 2017, the United States had intelligence that Russian Iskander tactical ballistic missile systems had been modified to launch 9M729 (NATO codename SS-CX-8) submarine-launched cruise missiles, violating the INF treaty. Meanwhile, the U.S. Army has talked about modifying its multiple-rocket launcher artillery system to launch missiles with ranges over three hundred miles that may also violate the treaty. Methods for circumventing the treaty, like floating ground-based missiles on barges so they no longer “count” have also been widely discussed.

The INF treaty has nonetheless saved the United States and Russia millions of dollars of military spending in the last three decades on developing redundant nuclear-apocalypse generating weapons. Though the treaty is obviously endangered by a rising tide of violations and loophole exploiting, one should hope its total collapse can be avoided so to spare everybody yet another expensive form of nuclear-arms race.

Tomahawk: The U.S. Navy's Ultimate Weapon Is Getting a Major Facelift