The United States Secretly Tested a Hypersonic Weapon in March 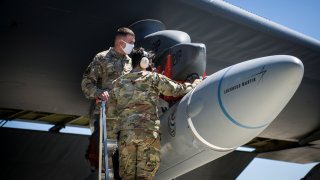 Despite some uncertainty about the future of its hypersonic weapons systems, the United States announced this week that it successfully completed a test of a hypersonic system. The Defense Advanced Research Projects Agency (DARPA) and the Air Force announced on Tuesday that they “recently completed a free flight test of the Lockheed Martin version of the Hypersonic Air-breathing Weapon Concept (HAWC)."

This follows the successful launch, last September, of a different configuration from Raytheon and Northrop Grumman.

“The vehicle, after release from a carrier aircraft, was boosted to its Aerojet Rocketdyne scramjet engine ignition envelope,” the announcement said. "From there, it quickly accelerated to and maintained cruise faster than Mach 5 (five times the speed of sound) for an extended period of time. The vehicle reached altitudes greater than 65,000 feet and flew for more than 300 nautical miles.”

CNN reported that the test took place in March, but the launch was kept quiet in order to “avoid escalating tensions” with Russia ahead of the president’s visit to Europe last month.

According to the Drive, the missile "was launched successfully from a B-52H bomber off the west coast” of the United States. The Drive noted that it is possible that other hypersonic tests have taken place but have not been made public.

Russia launched its own hypersonic weapon in Ukraine in what was believed to be the first time a hypersonic missile was used in combat. U.S. officials, however, downplayed the significance of Russia’s use of a hypersonic weapon, with Secretary of Defense Lloyd Austin stating in a television interview that the launch wasn’t being seen as a “game-changer.”

"This Lockheed Martin HAWC flight test successfully demonstrated a second design that will allow our warfighters to competitively select the right capabilities to dominate the battlefield,” Andrew Knoedler, HAWC program manager in DARPA's Tactical Technology Office, said on Tuesday. “These achievements increase the level of technical maturity for transitioning HAWC to a service program of record.”

Data, however, is still being gathered. “We are still analyzing flight test data, but are confident that we will provide the U.S. Air Force and Navy with excellent options to diversify the technology available for their future missions,” Knoedler said.

The test, the Drive reported, is the latest fruit of a $928 million HWAC contract that Lockheed Martin was awarded in 2018.

“Ultimately, HAWC, like other hypersonic weapons, offers a key advantage in being able to conduct short- or no-notice strikes against time-sensitive and other critical targets, and do so at standoff ranges,” the Drive said of the weapons system. “At the same time, hypersonic missiles like HAWC can maneuver within the atmosphere, allowing them to fly a more unpredictable flight path compared to other traditional long-range weapons, such as ballistic missiles, and making it far harder for enemy defenses to defeat them.”