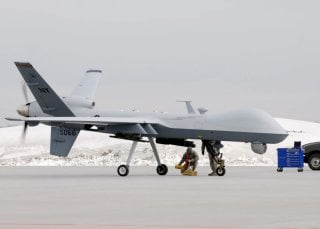 “I’m talking to my Australian counterparts in general about the NGAD family of systems and how they might be able to participate,” Air Force Secretary Frank Kendall said, according to Air Force Magazine.

Kendall explained that the United States and Australia are “having preliminary discussions” concerning the MQ-28 Ghost Bat and determining if the platform can serve as “a risk reduction mechanism” for the United States' own Next Generation Air Dominance program.

“I think there’s a lot of mutual interest in working together. And we’re going to be sorting out the details over the next few weeks,” he said.

In addition, fully twenty percent of the U.S. B-2 Spirit fleet is currently on deployment in Australia. The stealthy strategic bombers are the stealthiest aircraft ever built, and thanks to their nuclear payload capabilities, they are a powerful deterrent against Chinese aggression.

Speaking to Jane’s, a U.S. Air Force lieutenant explained that the B-2 deployment “supported the enhanced cooperation initiative under the Force Posture Agreement between the United States and Australia.”

He added that “airmen conducted training and strategic deterrence missions alongside the Royal Australian Air Force to demonstrate a shared commitment to a free and open Indo-Pacific.”

Kendall hinted that strategic long-range strike aviation could also be an area in which Australia and the United States cooperate.

“If I saw you had a requirement for long-range strike [capability], then we’d be willing to have a conversation with [Australia] about that,” Kendall said, mentioning the upcoming B-21 Raider stealth bomber, a strategic aircraft that will eventually replace the B-2.

“I don’t think that there’s any fundamental limitation on the areas in which we can cooperate,” Kendall added.

The impetus for this cooperation is, of course, China. With the flames of war still alight in Ukraine, the Indo-Pacific region has eyed China’s designs on Taiwan with increased suspicion and provided a reason for countries to move closer to the United States.

Australia is no exception. The country has endured significant economic bullying from China and is also interested in keeping the Indo-Pacific, Australia’s backyard, free and open. As a result, the future of the U.S.-Australian relationship is bright.