Is the U.S. Abdicating Global Leadership? 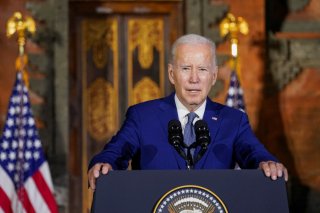 In March 2022, in his first State of the Union address, President Joe Biden called the current competition for global influence “the battle between democracy and autocracy.” Introducing the National Defense Strategy, Secretary of Defense Lloyd Austin, called China the “most consequential strategic competitor for the coming decades.” This may be true but the post-Cold War struggle is more complicated than that.

The United States has yet to fully embrace the notion that future conflicts will likely occur in the so-called “gray zone,” the space between war and peace, in which there will be a race for mineral resources, ports, investment, governance, alliances, technical expertise, narrative and of course, military prowess.

U.S. foreign policy tends to focus on the military aspects of the struggle while our adversaries take a more nuanced approach. Our competitors may not challenge the United States in the traditional sense but they methodically undermine U.S. national security as their influence grows.

In Africa, China has made no secret of its ambitions. Beijing has used its Belt and Road Initiative (BRI), to invest in fifty-two African countries with the aim of exerting control over local governments through education, mining, non-governmental organizations (NGOs), retail, and banking. China now manages or funds the operation of about two dozen African ports. Russia’s presence is less obvious. It trades weapons and military expertise for access to natural resources. Russia is now the largest supplier of weapons in Africa. The Congolese army’s recent order of Russian military helicopters caught the West off guard. The benefits Russia derives is not limited to economics. That seventeen African nations abstained from a United Nations (UN) vote to condemn Russia’s invasion of Ukraine should be a wake-up call for the West.

In the Middle East, Iran and Turkey utilize proxy militias while Russia and China operate behind-the-scenes with military and economic support. Influence can be even easier to attain in the Indo-Pacific region where China has simply bribed key politicians. In December 2021, the prime minister of the Solomon Islands, Manesseh Sogavare, who rescinded his country’s recognition of Taiwan in favor of mainland China, survived a no-confidence vote after he distributed $2.5 million in Chinese money to thirty-nine out of fifty members of parliament.

In 2021, the Carnegie Endowment for International Peace surveyed Chinese influence in four South Asian countries. Its lessons are applicable more broadly. Locals criticized American “consistency.” Frequent military and diplomatic rotations prevent the development of meaningful relationships and our polarized politics leave many wary of working deeply with any administration.

That the State Department and Senate have failed to fill or confirm nearly a quarter of U.S. ambassadorships plays into China’s hands. For the first time, China has more diplomatic outposts than the United States. Too many American ambassadors, meanwhile, lack a deep understanding of the countries they serve.

While in Syria, I witnessed the impact of poor policy. Local leaders and military representatives stressed to U.S. officials that they needed a sustainable long-term water supply to supply the al-Hol refugee camp. America’s response was a series of intermittent contracts with NGOs who dispatched water trucks. When they expired, U.S. forces and local partners were frantic that the water shipments would dry up. In the end, the United States extended the contracts with the caveat that this would be the last time. China and others offer a focused and persistent presence in developing countries. They target what other countries want, while America tends to believe it knows best or push solutions in line with the philosophies of the political party in power.

For Western-style foreign assistance to work, controls must play a key role. U.S. controls protect its bureaucracy and careerism more than they ensure projects succeed or managers use resources judiciously. Over time, America’s foreign aid procedures have layered on rules, regulations, and requirements that are irrelevant to success and put the United States at a competitive disadvantage.

Our adversaries recognize that they will likely lose an all-out war with the United States. We must never do anything to dissuade them. However, policymakers need to understand U.S. structural impediments. Procedures need to be streamlined and project consistency. Foreign offices need full staffing and budgetary discipline to allow the United States to maintain both an unassailable military and an unparalleled ability to compete in gray zone conflicts.

For decades, America has stood up to military challenges but failed to answer non-military challenges with the same urgency. Democracies’ adversaries rest easy knowing the free world will not launch an unprovoked attack, and so they adapt tactics to deprive America of allies and resources. They embrace incrementalism and ambiguity to deny the West the responses it has favored for the past fifty years.

As America continues to strengthen its focus on military equipment, technology, and manpower, its competitors are allocating their resources across a much larger playing field. Unless Washington recognizes the breadth of the challenge, it will soon find its fleet has fewer places to dock, its planes fewer places to land, its corporations fewer places to sell, and the world’s strategic minerals out of its reach.