The U.S. Air Force Can't Fight Anyone Without This One Thing 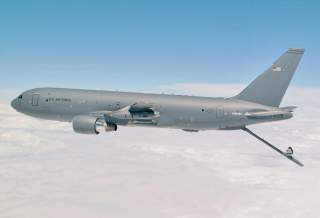 The proposed 2021 defense budget submitted by the Air Force in February involves a startling but possibly inevitable compromise: the Air Force is plans to retire twenty-nine old but functional aerial refueling tankers, while spending $2.85 billion to pay for fifteen new but dysfunctional ones that aren’t expected to be capable of performing their primary mission for at least three more years.

It also pitches in a further $106 million for research, development and testing, and $28 million for upgrades that will hopefully fix the new but non-mission capable aircraft it’s buying… eventually.

We live in a world where these bizarre-seeming decisions make a certain degree of sense—but only because yet another major military procurement has gone very far off the rails.

In theory, the new Boeing-manufactured KC-46A Pegasus tankers should be a pure win for the Air Force—the new tanker, based on the 767-200ER airliner, has more fuel efficient engines allowing it to reserve more of its fuel supply for delivery. Furthermore, it can refuel up to three aircraft at once, is compatible with both Air Force and Navy aircraft, and boasts new defense systems to protect against anti-aircraft missiles.

The Pegasus’s biggest innovation was its change from the manually operated refueling boom controlled by an operator peering through a window in the tanker’s belly to a remote-control boom operated from the cockpit. Crew wearing 3D glasses peer into a video feed from a three-dimensional multi-spectral camera system called the Remote Viewing System (RVS), which you can see profiled here by The Drive, to operate the boom.

But the search for a hi-tech replacement for the old-school mechanical method has landed the Pegasus in a lot of trouble, and also left it over two years behind schedule, with the Air Force receiving its first KC-46A deliveries in January 2019 and technically entering the Pegasus into operational service in May. That “operational status,” though came with a big asterisk, as problems with the Pegasus’s refueling boom has led it to be rated non-fully mission capable for its primary mission: refueling other aircraft.

That’s because the RVS is providing distorted or unclear visuals under some circumstances, giving it’s operators the equivalent of 20/50 vision (nearsightedness). Coupled with reported clumsy boom controls, this has resulted in KC-46 banging or scraping the fighters they are servicing, as you can see in this video. This is particularly unacceptable when such impacts could damage the expensive coating relied upon by stealth aircraft to minimize their radar signatures.

While the boom has its problems, the Air Force particularly sees the RVS as culpable and wants it fixed—but General David Goldfein complained in September 2019 “Eight months have passed since our first delivery, and Boeing has not made any progress in addressing those deficiencies.”

The same month, the head of Air Mobility Command, General Maryann Miller, told reporters at a defense conference that KC-46s wouldn’t be ready for combat deployment for three more years. Senior defense officials continued to harangue and send angry letters to the aviation giant through January 2020.

Another issue is that the KC-46’s boom doesn’t work yet with the A-10 Thunderbolt attack jet due to the lower thrust, and thus pressure it can exert on the boom mechanism. Accumulated problems have also delayed certification of the F/A-18E/F Super Hornet—the primary fighter type operated by the U.S. Navy. However, the Pegasus is at least certified to refuel Air Force F-16 and F-15 jet fighters, Marine FA-18C/D Hornet jets, C-17 transport planes, B-52 bombers and other KC-46A tankers.

There are also non-boom/RVS related issues. Tanker aircraft do frequent double duty as cargo planes, but KC-46 fleet was banned from cargo flights for several months in 2019 due to an incident in which cargo floor restraints unlocked mid-flight without apparent cause, leaving cargo unsecured.

The Air Force is also angry to have discovered that Boeing technicians had failed to clear delivered aircraft of Foreign Object Debris—tools, nuts and bolts, bits of metal—scattered around inside the airframe. FOD can cause wear and tear over time and has proven costly to clean up.

Statements from the Pentagon have reflected genuine anger over the KC-46’s flaws, but that hasn’t dissuaded the Air Force from buying more of the currently non-functional aircraft. The reason is simple: it has no alternative to turn to, and much of its largely 1960s-vintage tanker fleet is already hitting retirement age.

Instead, the military has tried to shift costs to Boeing. For example, the Air Force is withholding $28 million in payment for each Pegasus it receives until the flaws on that plane are corrected. As Boeing has delivered 31 KC-46s as of mid-February 2020, that implies Boeing is already down $868 million. Boeing has also spent $3 billion of its own money to try to fix the flaws.

Because the KC-46A is operationally suitable yet, it can’t pick up the slack left over by tanker retirements. For this reason, leaders of the Air Mobility Command have lobbied in the preceding months to delay retirements of its older aircraft so that it has enough “tails booms” to meet the extensive demands of operational units.

But the Air Force’s 2020 budget nonetheless mandates the retirement of thirteen KC-135 tankers and sixteen KC-10 Extender aircraft. Essentially, the air warfare service is prioritizing fleet modernization, even if that means taking a hit for the next several years in total capacity.

There are also calls in some quarters for the Air Force to contract privately operated tankers and their crews to perform air refueling missions to make up for the tanker gap, and thus prevent already overworked Air Force tanker crews from shouldering an even heavier burden.

Is there any light at the end of the tunnel, or rather, tail-boom for the Pegasus? Possibly. Defense News’ Valerine Ininna reported mid-February that General Goldfein saw prospects for a solution to the RVS’s problems being agreed upon by March (should negotiations with Boeing proceed well!), and that tests for the fixed boom might occur by the end of the summer.

Scheduled for this year are tests of the aircraft’s ruggedness in event of a nuclear blast and its attendant electro-magnetic pulse effect. But resolving the Category 1 problem will hopely be a priority.

To correct those flaws, the Air Force’s Pegasus fleet will require significant modifications and testing before they are ready for prime time.