The U.S. Air Force's F-22 Raptor Is Set for a Major Upgrade 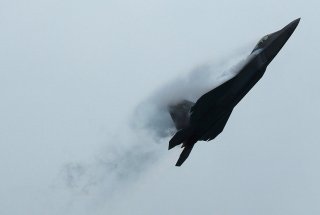 There is no denying that the Air Force’s F-22 Raptor was one of the most advanced aircraft in the world when it entered service in 2005. However, in the years since the air superiority fighter has only received a few upgrades compared to legacy fourth-generation aircraft such as the F-15 jet and F-16 jet, but now the F-22 has gotten a serious power-up that could pave the way for the testing of other advanced systems.

This week the 411th Flight Test Squadron working in conjunction with the 412th Range Squadron announced that they have achieved the first successful flight of the Common Range Integrated Instrumentation System (CRIIS) at Edwards Air Force Base, California. The new system was tested on August 5.

CRIIS is a tri-service test and evaluation range system that was designed to specifically to replace the aging Advance Range Data System (ARDS). The CRIIS system can downlink and relay aircraft TSPI, as well as other aircraft data to a test range ground station.

CRIIS can fulfill a critical Department of Defense (DoD) requirement to provide time, space and Position Information (TSPI) and systems evaluation data to support testing for a variety of current and next-generation platforms. The system has also been employed on legacy aircraft including the F-15, F-16 and F-18 jets.

According to the U.S. Air Force, recent CRIIS flight testing has even proven the ability of the system to record highly accurate TSPI on board the F-22 jet. In addition, a live stream test of CRIIS data from an F-22 jet to a mission control room is on track for later this summer.

“The CRIIS is truly a needed upgrade for the test enterprise,” said Lt. Col. David Schmitt, 411th FLTS and F-22 combined test flight director of operations. “The ability to record and utilize TSPI in real-time is a foundational piece of what we do. It is a critical enabler, which unlocks many of the tools the experts use to verify the performance of everything from fire control radars, to datalinks, to new or upgraded munitions. This was the first flight at Edwards of what will hopefully be a long legacy of CRIIS performance across the test enterprise.”

The new platform is also being deployed on aircraft platforms such as the F-22 Raptor, F-35 Lightning II, F-15 Eagle, F-16 Fighting Falcon, and F/A-18 Super Hornet. The CRIIS is expected to set a new tri-service standard for test range TSPI instrumentation.

It will be just one of several planned upgrades to the F-22 Raptor, which the Air Force plans to keep flying into the 2060s, at which point a sixth-generation fighter is planned to take over.