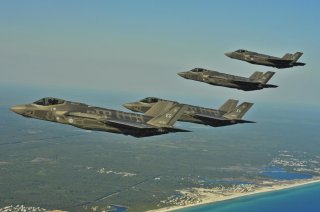 The civilian death toll in Ukraine is rapidly rising as Russia continues targeting children, maternity facilities, and residential areas with air strikes and cruise missiles. However, rather than being deterred by international condemnation over such attacks, Russian war planners appear intent on pressing forward with their efforts to destroy and take over Ukraine. While Russian military leaders have shown little to no hesitation when it comes to escalating their attacks on Ukraine, there are a number of reasons why President Vladimir Putin and his military leaders will think twice before directly confronting NATO.

While the outcome of Russia’s war on Ukraine may decide the fate of Putin’s regime, Russian leaders are likely extremely reluctant to go to war with the West. One key reason may be the Russian Air Force’s apparent inferiority vis-à-vis NATO.

A cursory comparison between the Russian Air Force and NATO’s force sizes and capabilities suggests that Russia could not compete with the United States and NATO in the air. Not only does Russia reportedly operate a very small number of fifth-generation Su-57 stealth fighters when compared with the hundreds of F-35 Joint Strike Fighters operated by the West, but Russia's force of advanced Su-34 and Su-30 fourth-generation fighters is not likely to pose an extremely credible threat to NATO. Therefore, U.S. and NATO air assets forward-positioned to Russia’s west may well be succeeding in the core mission of deterring against any possible Russian attack on NATO.

“That's why you have seen the deployments of F-35, F-16s, B-52s to a variety of different NATO nations. There's a very strong interaction and unified set of command and control architectures that are in place to deter any thought from Putin or his Russian military from expanding this conflict outside of Ukraine that might take on NATO,” retired Lt. Gen. David Deptula, dean of the Mitchell Institute for Aerospace Studies, told The National Interest in an interview.

While Russia continues to pose a substantial threat to the United States and NATO, perceptions about Russia’s true combat prowess have shifted in response to the Russian military’s poor showing in Ukraine.

Yet there is another factor of potential concern for Russia: the F-35. Russia’s effective, road-mobile S-400 air defenses have reportedly succeeded in shutting off potentially vulnerable Russian targets to air attacks from Ukraine. While the relative sophistication of upgraded Russian S-400s continues to get a lot of attention, it certainly seems quite possible that these advanced Russian systems could be destroyed by U.S. stealth aircraft such as F-35s or B-2 bombers.