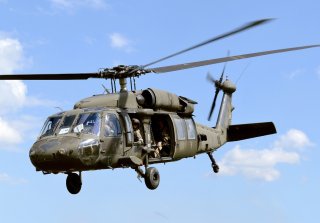 The U.S. Army’s UH-60 Black Hawk and the United Kingdom’s Bell 212 utility helicopters can both support air assault raids, conduct medical evacuation (MEDEVAC) missions, and deliver infantry into hostile fire, but how well can they operate together?

Refining, shaping and, ultimately, answering this question provide the primary inspiration for the U.S. Army’s efforts to jointly modernize a new helicopter strategy with the United Kingdom. Both countries are now moving beyond their legacy platforms to engineer a new generation of rotorcraft equipped to counter an array of emerging threats.

The recently signed “Feasibility Agreement” between the United States and UK to collaborate on Future Vertical Lift (FVL) technologies will certainly shape the landscape for helicopter warfare and joint tactics for years to come. Yet beyond its operational impact,  the agreement is likely to break new ground in other critical technical areas.

Aas described by senior Army developers, a critical goal of this endeavor is to establish “transformational interoperability,” something increasingly offered through the use of common internet protocols, technical standards, interfaces, and open-systems architecture.

“We want to provide the future force with access to the best available technologies and concepts and, ultimately, enhance transformational interoperability in any combined action. We know we may need these transformational capabilities on a future battlefield for the benefit of the Soldier on the ground,” Brig. Gen. Walter Rugen, director of the Future Vertical Lift Cross Functional Team at U.S. Army Futures Command, told Warrior in a written statement.

The agreement is specifically designed to ensure that British and U.S. helicopters modernize in tandem. “This arrangement … aims to reduce the divergence between the two countries’ open system architectures, a key component to keeping pace with emerging technology and rapid adaptability and capability evolution,” an Army statement on the FVL Feasibility Agreement states.

If wireless connectivity systems such as radar, radio, and other RF datalinks from both U.S. and UK helicopter platforms are engineered according to open standards, then secure, seamless operational connectivity can be preserved yet also regularly upgraded in the future.

This helps lay a foundation for continuous software upgrades across both U.S. and UK helicopter platforms. New software updates can improve weapons capabilities, add interfaces to new generations of weapons, and enable hardware systems such as radar and antennas to detect new threat information without requiring the technology to be rebuilt. This explains why the U.S. and UK agreement specifically references research, science, and technology initiatives as a key backbone of the joint effort.

“Together we are stronger. Our deep science and technology collaboration is an important element of this and makes us both more competitive. Today’s agreement formalizes our cooperation to help determine the future direction of aviation in competition and conflict,” Maj. Gen. James Bowder, the British director of Futures at Army Command, said in a statement on the effort.