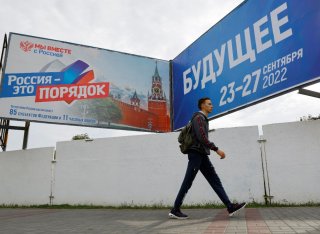 Referendums in four occupied Ukrainian regions, which are part of Russia’s scheme to annex parts of eastern and southern Ukraine, are drawing to a close.

Local Russian-installed officials announced that voting has concluded in three of the four regions: the Luhansk People’s Republic (LPR), Zaporizhzhia, and Kherson. The Donetsk People’s Republic (DPR) said certain polling stations will close at 20:00 Moscow time on Tuesday, according to Russian state news outlet TASS. Exit poll data published on Tuesday showed that 97 percent of voters in Zaporizhzhia, 96 percent in Kherson, 98 percent in the DPR, and 98 percent in the LPR voted to join the Russian Federation.

Russian forces control most of the Kherson, DPR, and LPR regions within their officially delineated borders. Local officials in the Russian-occupied part of Zaporizhzhia stated earlier in September that they intended to forge ahead with their referendum plans despite the fact that the region’s capital and administrative center, the city of Zaporizhzhia, remains in Ukrainian hands.

The referendums, which are expected to yield results for unification with Russia in all four regions, have prompted condemnation from Ukraine and the West. “The United States will never recognize Ukrainian territory as anything other than part of Ukraine. Russia’s referenda are a sham – a false pretext to try to annex parts of Ukraine by force in flagrant violation of international law, including the United Nations Charter,” President Joe Biden said in a statement last week. Local officials, accompanied by armed guards, allegedly went door to door with portable ballot boxes, sparking allegations that the voting was conducted under duress.

Kyiv has repeatedly said it will not recognize the legitimacy of any referendum organized by Russia on occupied Ukrainian territory.

Ukrainian president Volodymyr Zelenskyy last week ruled out prospects for future talks with Russia if the Kremlin proceeded with its referendum plans. Presidential advisor Mikhailo Podolyak warned that citizens who helped organize the referendums will face up to five years in prison. “We have lists of names of people who have been involved in some way,” he said, adding that citizens who were forced to take part in the voting will not be subject to criminal charges.

Moscow said it will respect the results of the referendums which could lead to Russia annexing around 15 percent of Ukraine’s territory. This would oblige the Kremlin to view subsequent Ukrainian offensives in the annexed regions as attacks on Russian territory, paving the way for a new round of escalation in the Russo-Ukrainian War. Russian leader Vladimir Putin is expected to formally recognize the referendums during a planned address to both houses of Russia’s parliament on Friday.