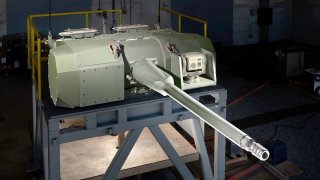 U.S. defense contractor Northrop Grumman is continuing to deliver the XM913 50mm cannon to the U.S. Army, even as the service continues to consider its cannon caliber requirements for the vehicle that will eventually replace the aging M2 Bradley Fighting Vehicle.

Janes reported that the contractor remains under contract with the Army to mature the cannon, and as of late August four of the XM913 cannons had been delivered while plans are for an additional seven to be delivered by the end of October. The company was also reportedly expecting an additional order for 10 cannons that would provided for qualification, testing and integration activities.

Last year the Army began testing the new 50mm cannon that would be used for its Next-Generation Combat Vehicle (NGCV) and a live-fire demonstration was held at Northrop Grumman's 2019 Bushmaster User Conference in Kingman, Ariz., to highlight how the weapon could be integrated onto the military's armored platforms.

The Bushmaster chain gun has been tested as a counter rocket, artillery and mortar (C-RAM) and counter unmanned aerial vehicle (C-UAV) weapon. It was initially developed under the Extended Area Protection and Survivability Integrated Demonstration (EAPS ID) and has been subsequently tested in tracking distant moving target by utilizing interferometic radar as a sensor, fire control computer and a radio frequency transmitter and receiver to launch a course-correcting projectile.

The Army has been working with Northrop Grumman to further develop the cannon to support its NGCV program, but also to increase the rate of fire and range over existing weapons.

A decided emphasis for the Army's NGCV is speed, maneuverability and expeditionary warfare, and to see and destroy enemies before the enemy can fire back.

The XM913 cannon can fire two types of munitions including XM1204 High Explosive Airburst with Trace (HEAB-T), and XM1203 Armour-Piercing Fin-Stabilized Discarding Sabot with Trace (APFSKS-T). This has been described as central to the Army's Advanced Lethality and Accuracy System for Medium Caliber (ALAS-MC) efforts, Janes reported.

The ALAS-MC was designed to allow gunners to be more agile and to fire with higher accuracy, even along further distances.

"The combination of enhancements not only give gunners greater versatility, but we anticipate that overall gunner operations could be as much as three times faster," said Kevin Fitzpatrick, of the Advanced Armaments Division of the Combat Capabilities Development Command Armaments Center, located at the U.S. Army's Picatinny Arsenal.

"Another key aspect of the ALAS-MC development is that it is using a development model aimed at future system growth that can be adapted for future technologies that enable multi-role missions," Fitzpatrick added.