Is The U.S. Army Over Israel's Iron Dome? 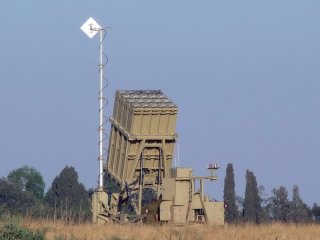 On March 5, Army officials testified before Congress about various reservations they held regarding the two Iron Dome air defense systems Congress had required the service procure in 2019 to fulfill an Interim cruise-missile defense requirement. Two days later, the Army canceled plans to purchase two more Iron Dome batteries—even as the Marine Corps reportedly remains interested in integrating the missile component of Iron Dome into its own air defense systems.

Three days after the second Iron Dome order was canceled, two U.S. servicemen and a fellow British soldier were killed in Iraq by 107-millimeter Katyusha rockets launched by Iranian-backed militants. Unguided Katyusha rockets were precisely the type of weapons Iron Dome was originally designed to defend against—but not the type of weapon the Army wants it to defend against.

You can read more about Iron Dome in this earlier article, which describes the system’s characteristics and its uniquely high success rate intercepting over a thousand rockets and mortar shells over Israel. Each Iron Dome battery consists of an Elta radar, and six launchers each armed with twenty Tamir interceptor missiles.

I noted in the earlier article a limitation of Iron Dome when it came to fulfilling U.S. Army requirement for protection from cruise-missiles:

“Cruise missiles are more difficult to intercept than crude rocket artillery arcing in a predictable ballistic trajectory. Modern cruise missile designs often include defensive features such as skimming at very low altitudes and engaging in pop-up or l-shaped maneuvers prior to impact; others have stealthy reduced radar cross-sections, or travel extremely fast at supersonic or hypersonic speeds.

Indeed, in IDF service the Iron Dome is meant to be complemented by two higher-tier defensive systems… Thus the Iron Dome may require adaptation to serve as more than an interim solution.”

That said, Israeli Iron Dome systems have shot down more challenging targets including drones, aircraft and a Fateh ballistic missile. However, it’s not tailor-made to serve as an anti-cruise missile system.

Army acquisitions chief Bruce Jette told the House Armed Services Committee that Iron Dome manufacturers “…have espoused, and to some degree demonstrated, the ability to deal with some cruise missiles. The problem is we have to deal with all cruise missiles, and we don’t think we’ve gotten there yet.” Jette may have been referring to very fast or stealthy cruise missile types.

But other Army officials have made a very different argument: that Iron Dome is proving excessively difficult to integrate into the Army’s Integrated Battle Command System (IBCS) air defense network. IBCS is supposed to tie together multiple sensors and various types of missiles to form a multi-layered integrated air and missile defense system.

“We believe we cannot integrate them into our air defense system based upon some interoperability challenges, some cyber [security] challenges, and some other challenges. So what we ended up having is two stand-alone [Iron Dome] batteries that will be very capable, but they cannot be integrated,” Army Futures Command chief Gen. John Murray told Congress.

Later he clarified to Sydney Freedberg of Breaking Defense that he believed it would be “exceptionally difficult” to implement such an integration, particularly with the AN/MPQ-64 Sentinel radars already used to extend the capabilities of Patriot missile batteries against low-altitude threats.

But there’s a third, related issue cited by the Army: Rafael, the Israeli manufacturer of Iron Dome, is unwilling to share the source code which the Army would presumably need to modify the batteries to integrate with existing American systems.

The Army insists that it will give Iron Dome a fair shake when it holds a competitive “Missile Shoot Off” likely at the White Sands Missile Test Range. It seems likely the Norwegian Kongsberg NASAMs system—already used for defense of Washington DC—may be preferred by the Army. NASAMs combines radars with land-based variants of the AIM-120 and AIM-9X medium- and short-range air-to-air missiles.

But there’s a curious discrepancy with the Army’s criticisms—the Marine Corps claims its own Iron Dome-based SkyHunter system has integrated nicely with their AN/TPS-80 Ground/Air Task-Oriented Radar (G/ATOR). That integration appears to have been successfully tested in October 2019.

The Marines appear to be specifically interested in the Tamir interceptor missile, which is manufactured 70 percent domestically by Raytheon. A presentation by the service envisions mounting six Tamir missiles on a JLTV (the Humvee successor) or twenty missiles on a bigger Oshkosh MTVR 5-ton truck.

The Marine’s apparent satisfaction with SkyHunter raises questions over just how insurmountable of a problem it is to make Iron Dome compatible with the Army’s IBCS system and just how dissatisfactory its performance is versus cruise missiles. However, IBCS isn’t the same as G/ATOR, and the Army likely has different performance requirements than the Marine Corps.

Nonetheless, the overall impression remains that the Army never really wanted Iron Dome, which was foisted upon it by a congressional requirement. The service’s eschewing of additional batteries seems in keeping with a recent trend in which the services refuse quick-fix solutions available at hand in the hopes of getting a more exquisitely tailored solution years later.

That can mean the Army will get a better system on the long term (if the program doesn’t become an over-ambitious failure, as happens with worrying regularity in major defense programs), at the expense of having a capability available on the short-term. That may be the right call given that a major armed conflict doesn’t seem imminent—but still can be rough if you’re the unlucky soldiers caught in a rocket, missile or drone strike without any effective short-range air defenses close at hand.

Sébastien Roblin holds a Master’s Degree in Conflict Resolution from Georgetown University and served as a university instructor for the Peace Corps in China. He has also worked in education, editing, and refugee resettlement in France and the United States. He currently writes on security and military history for War Is Boring. This article first appeared in March 2020 and is being republished due to reader interest.