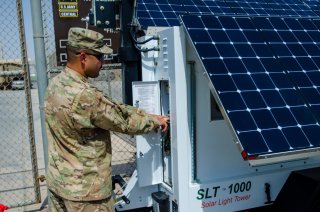 Melting ice in the Arctic, skyrocketing heat in strategic areas, unpredictable weather patterns, and large-scale societal disruption are all growing concerns associated with the troubling phenomenon of climate change.

While most are aware of the scientific discussion surrounding climate change, there is a less discussed and extremely consequential issue that is also impacted by climate change: national security.

It may not receive as much attention as it deserves, but climate change raises a number of very important national security questions. How will forward operating units stay sufficiently cool to perform operations while in extreme heat? How will Arctic troops maneuver and navigate a fast-changing environment in which melting ice creates new waterways on a regular basis? Can combat units adapt if sudden storms cause massive floods in populated areas? What happens if all of these things transpire amid an ongoing combat operation?

These challenging questions were the primary inspiration for the U.S. Army’s recently released climate strategy, a document that sets ambitious goals and calls for sweeping changes across the service.

“[The Army’s] mission is to fight and win the nation’s wars … nothing in this strategy will detract from or impede us from accomplishing this mission. We actually believe that this strategy will enhance our ability to accomplish that mission,” said Paul Farnan, Assistant Secretary of the Army for Installations, Energy, and Environment.

The strategy warns that “as [greenhouse gas] emissions increase global average temperatures, scientists have observed several primary impacts of this hazard—in particular, more and worsening droughts in some regions while other regions experience more frequent and severe flooding. As a result, some regions of the world will have less access to water supplies, while others will be subjected to widespread and prolonged inundation.”

The strategy even takes this a step further, explaining that climate instability and extreme, fast-changing weather can lead to “increased armed conflict in places where established social orders and populations are disrupted.”

​​Army Secretary Christine Wormuth added that “climate change threatens America’s security and is altering the geostrategic landscape as we know it.”

For instance, should populations find themselves without crucial resources such as food and water, the likelihood of armed conflict or war will increase. Farnan also noted that widespread humanitarian disasters caused by climate change can be a major source of instability.

“The Army must prepare for potential consequences including energy and water scarcity; damage to installations and infrastructure; displacement of and disruptions to operations, supply chains, and logistics; and imperiled Soldier health through exposure to airborne irritants like smoke and dust, disease vectors, and temperature extremes,” the strategy states.

While the Army’s report may seem unusual at first, these issues will only become more important in the face of the growing threat posed by climate change.