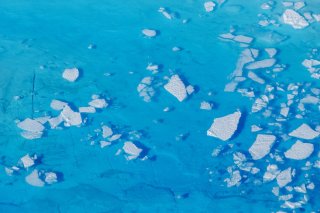 Roughly twenty years ago, the Greenland ice sheet likely entered a state of sustained mass loss that will persist for the foreseeable future, according to a study that was published in Nature Communications Earth and Environment.

Second in size only to the Antarctic ice sheets, the Greenland ice sheet covers 79% of the entire vast island. It holds the equivalent of about twenty-four feet of global mean sea-level rise and—due to its quickly accelerating retreat—is believed to be the biggest single contributor to rising sea levels on the planet.

The study tapped into nearly forty years of satellite data from more than two hundred large glaciers to settle on the troubling findings.

“Glacier retreat has knocked the dynamics of the whole ice sheet into a constant state of loss,” the study’s co-author Ian Howat, director of the Byrd Polar and Climate Research Center at Ohio State University, said in a statement.

“Even if the climate were to stay the same or even get a little colder, the ice sheet would still be losing mass.”

The problem largely stems from the fact that snowfalls that replenish the ice sheet each year are not able to keep up with the melt rate of the glaciers. This is in contrast to the decades leading up to the turn of the century, when the ice sheet was in a state of relative equilibrium.

“We’ve been looking at these remote sensing observations to study how ice discharge and accumulation have varied,” the study’s lead author Michalea King, of the Byrd Polar and Climate Research Center, said in a statement.

“And what we’ve found is that the ice that’s discharging into the ocean is far surpassing the snow that’s accumulating on the surface of the ice sheet.”

According to the National Oceanic and Atmospheric Administration, ice loss from the Greenland ice sheet surged sevenfold from thirty-four billion tons a year from 1992 to 2001 to 247 billion tons annually from 2012 to 2016.

And by the end of the century, the global sea level will likely be a foot higher than what was seen in 2000.

One peer-reviewed study published in May in the journal Climate and Atmospheric Science has painted an even grimmer picture. By the year 2300, when ice sheets covering West Antarctica and Greenland will have shed trillions of tons of mass, sea levels could swell by more than sixteen feet, which would likely redraw the globe’s coastlines.

Today, about 770 million people, or about 10% of the global population, live on high-risk land that is less than sixteen feet above the high-tide line.