Doomsday: By 2300, Global Sea Levels Could Rise by an Astounding 16 Feet 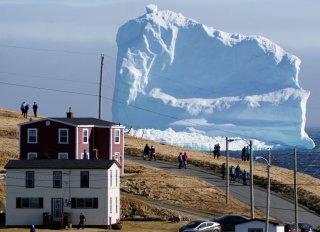 International scientists recently warned that if Earth’s surface temperature warms another 6 to 7 degrees Fahrenheit, oceans will likely rise as much as four feet by the year 2100.

In a peer-reviewed study published in the journal Climate Atmospheric Science, the world looks even grimmer by 2300, when ice sheets covering West Antarctica and Greenland will have shed trillions of tons of mass. In this catastrophic scenario, sea levels could swell by more than 16 feet, which would redraw the globe’s coastlines.

Benjamin Horton, acting chair of the Nanyang Technical University’s Asian School of the Environment in Singapore, headed the survey that aimed to give “policymakers an overview of the state of the science,” a statement said.

Today, about 770 million people, or about 10 percent of the global population, live on high-risk land that is less than 16 feet above the high-tide line.

Compared to various reports released by the U.N. Intergovernmental Panel on Climate Change (IPCC), these new projections for both 2100 and 2300 paint a much more frightening picture about what’s to come.

“It is clear now that previous sea-level rise estimates have been too low,” the study’s co-author Stefan Rahmstorf, head of Earth system analysis at the Potsdam Institute for Climate Impact Research, told AFP.

“The IPCC tends to be very cautious and conservative, which is why it had to correct itself upwards already several times.”

Experts warned that although sea-level rise might not garner the same media attention of punishing hurricanes and crop-destroying droughts, this particular threat might ultimately prove to be the most devastating of all climate-change effects. Only a couple of extra inches of ocean water could make tropical storms and hurricanes that much more lethal and destructive.

Scientists noted that for much of the 20th century, sea-level rise was caused chiefly by melting glaciers and the expansion of ocean water as it warms. Over the last two decades, however, the main culprit has been the melting of Greenland and West Antarctica.

These two massive ice sheets are losing at least six times more ice today than during the 1990s. From 1992 through 2017, these two bodies shed roughly 6.5 trillion tons of mass.