3.5 Billion People Could Live in 'Sahara Desert-Like Heat' by 2070 Thanks to Climate Change 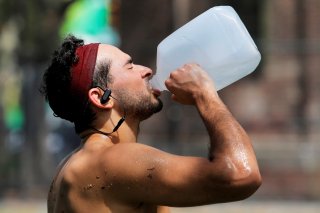 If current climate trends don’t quickly change, an estimated 2 billion to 3.5 billion people will be forced to live in Sahara Desert-like heat in about 50 years.

The study, which was published in the journal Proceedings of the National Academy of Sciences, said with every 1.8 degree increase in global average annual temperature from man-made climate change, about a billion people will end up in areas too hot to be habitable without some kind of cooling technology.

Exactly how many people will be affected largely depends on how much of the heat-trapping carbon dioxide emissions are reduced and how quickly the global population grows.

A team of international scientists studied humans like they usually do animals and birds to pinpoint the “climate niche” where populations and civilizations thrive. They were able to peer back 6,000 years to come up with a temperature sweet spot—between 52 and 59 degrees.

The scientists pointed out that humans do live in warmer and colder places than those temperature ranges, but farther they get from those figures, the tougher their lives will be.

“We show that in a business-as-usual climate change scenario, the geographical position of this temperature niche is projected to shift more over the coming 50 years than it has moved (in the past 6,000 years),” the study said.

Today, roughly 20 million people live in regions that have an annual average temperature greater than 84 degrees, which is far above the aforementioned sweet spot. That area makes up less than 1% of the entire planet’s land surface, and it is mostly located near the Sahara Desert.

According to the team’s projections, this near-unlivable area could expand to cover 19 percent of the global land surface within 50 years if current emission levels aren’t reduced.

As the world’s temperature continues to rise, along with the population, the study determined that large strips of Africa, Asia, South America and Australia would likely be mired in the Sahara-like temperature range by 2070. The people who would be most affected are the middle class and the poor.

All is not lost, however, as concerted actions to reduce greenhouse gas emissions could save millions of people from such extreme heat.

“The good news is that these impacts can be greatly reduced if humanity succeeds in curbing global warming,” the study’s co-author Tim Lenton, director of the Global Systems Institute at the University of Exeter, said in a release.

“Our computations show that each degree warming above present levels corresponds to roughly 1 billion people falling outside of the climate niche. It is important that we can now express the benefits of curbing greenhouse gas emissions in something more human than just monetary terms.”