This U.S. Coast Guard Cutter is Visiting the Black Sea and Russia Doesn’t Like It 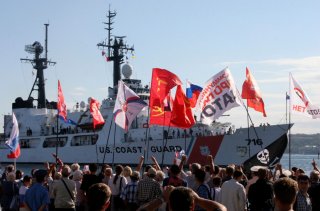 The U.S. Navy has operated destroyers in the Black Sea fairly regularly to demonstrate forward presence, connect with Eastern European allies, and of course support deterrence missions. Yet recent U.S. Coast Guard operations in the region have generated a tense response from Russia.

Russia’s TASS news agency published a report stating that their country’s Black Sea Fleet monitored the movements of the U.S. Coast Guard Cutter, the USCGC Hamilton. Observing that the last time a boat such as this entered the Black Sea was in 2008, the TASS news report quotes Russian Foreign Ministry officials noting that the “presence of non-regional powers in the Black Sea does not facilitate regional stability.”

While Russian assets are likely to regularly monitor any U.S. and NATO activity in the Black Sea, there does appear to be some significance to the fact that the boat is a U.S. Coast Guard cutter.

The presence of a U.S. Coast Guard ship in the Black Sea, while seemingly unusual, is entirely aligned with the U.S. Navy’s strategic vision which encompasses a growing interoperable role for the U.S. Coast Guard as it supports the other maritime services.

Any kind of strategic expansion of the U.S. Coast Guard, particularly as it pertains to increasing operational integration with Navy and Marine Corps technology, is likely a significant and impactful way the U.S. Navy can increase its presence and surveillance footprint. While perhaps  U.S. Coast Guard ships, might be regarded as less provocative than sending in destroyers, the ships are increasingly networked to interoperate with U.S Navy platforms. This strategy is particularly evidenced through the Coast Guard’s current developmental new Off-Shore Patrol Cutter program.

Strategically, the Russian newspaper’s reference to a Black Sea Fleet able to “surveil” U.S. movements raises some interesting questions. Of course, the Russian Navy is considered somewhat of a serious threat, particularly given its reported 64 submarines. The service does only operate one aircraft carrier and a handful of Frigates and Destroyers, a reality which might suggest that any kind of credible Russian efforts to “deter” the U.S. and NATO in the Black Sea might be pursued with land forces. The Russian surface Navy, while both smaller and potentially greatly outgunned by its U.S. Navy rivals might be more inclined to conduct surveillance missions as a primary method of deterrence.