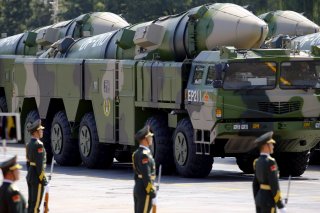 The three companies named in the order are high-end 3-D printing companies that provide contracting services to the aerospace and defense industries. When a defense manufacturer needs a 3-D mockup of a design prototype, they send the specifications to a printing company which then prints the design and sends it back. The Commerce Department, which announced the sanctions, indicated that the three companies had then subcontracted their work to 3-D printing companies in China with lower costs—a step presumably taken to save money, but one that may have also resulted in the transfer of extremely sensitive information on rocket, missile, and satellite designs to the Chinese government. The Commerce Department’s statement did not indicate awareness of whether Beijing had obtained the designs but underlined that the transfers in question presented “serious national security concerns.” It also urged defense manufacturers that had contracted with the three firms to check their records and ensure that their intellectual property remained intact.

“Outsourcing 3-D printing of space and defense prototypes to China harms U.S. national security,” Assistant Secretary of Commerce Matthew Axelrod said in a statement. “By sending their customers’ technical drawings and blueprints to China, these companies may have saved a few bucks—but they did so at the collective expense of protecting U.S. military technology.”

Because of the sensitive nature of the data in question, similar transfers usually require approval from the U.S. government. However, the Commerce Department stated that none of the companies had requested permission, potentially resulting in criminal penalties.

Although the ownership of the three companies was not immediately clear, they appear to be linked, as all use the same rented P.O. box in Wilmington, North Carolina, according to the Associated Press.

Concerns about Chinese intellectual property theft have been a major sticking point in U.S.-China relations over the past two decades. In 2017, the Trump administration estimated that China gained between $200 billion and $600 billion per year from one-way intellectual property transfers—mostly given voluntarily by American firms in exchange for access to China’s markets and manufacturing sector.