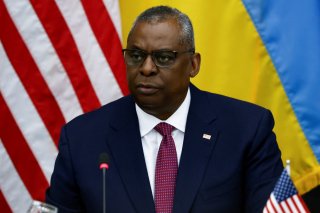 Russia is making gains in the eastern Donbass region, despite intense Ukrainian resistance. Ukraine still needs “long-range fires, armor and coastal defense,” according to U.S. defense secretary Lloyd Austin, who addressed reporters after the third meeting of the Ukraine Defense Contact Group at NATO headquarters in Brussels, Belgium. Austin was clear that despite the massive international effort so far, Ukraine still needs more.

“After failing to take Kyiv and reassuring its combat aims -- or reassessing its combat aims, Russia has shifted its focus to the Donbas, and we can't underestimate the challenge that Ukraine faces. Russia is using its long-range fires to try to overwhelm Ukrainian positions, and Russia continues to indiscriminately bombard Ukraine's sovereign territory and recklessly endanger Ukrainian civilians,” Austin added in his opening remarks.

“We must intensify our shared commitment to Ukraine's self-defense and we must push ourselves even harder to ensure that Ukraine can defend itself, its citizens and its territory,”  Austin explained.

While Ukraine's success against the Russian military has caught the world by surprise, many have warned that the sheer size of Russian forces in the region will eventually overwhelm Ukrainian defenses. Although the Ukrainian tenacity, resolve, and tactical success has captured the world’s attention, there remains a massive combat power deficit between Ukraine and Russia. Surprisingly, through innovative tactics such as the use of anti-armor weapons, ambushes, and dismounted hit-and-run attacks, Ukraine has shocked the world by thwarting, slowing, and even “stopping” Russian advances in certain areas of Ukraine. This was true in areas north of Kyiv, but will it remain the case in the Donbass? As many analysts anticipated, Ukrainian defenses in the Donbass region are in jeopardy.

“Ukraine is facing a pivotal moment on the battlefield, and we're seeing what President Zelenskyy warned us about,” Austin said.

There are, however, some reasons why Ukraine might have cause for hope. Close-quarters combat may still favor Ukrainian defenses if they have enough anti-armor weapons such as Javelins. Mechanized vehicles will need to advance through cities and congested areas with narrow passageways to ultimately “conquer” and hold territory in Donbas. The Ukrainians have already shown that advancing Russian armor is extremely vulnerable to ambushes at intersections, crosspoints, and narrowly configured areas. This advantage is optimized by dispersed and dismounted Ukrainian units that are difficult to target and able to launch surprise attacks from obscured positions such as buildings or uneven terrain. However, Ukrainian forces are still faced with an overwhelming bombardment of long-range Russian rockets and missiles wreaking havoc on civilian areas and Ukrainian positions. Some of these Russian weapons are known to have a range of 200 to 300 miles, making them very difficult to counter without defenses such as long-range fires.