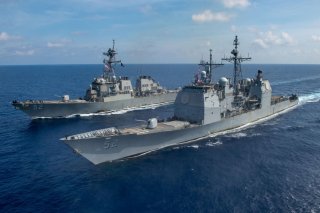 The Arleigh Burke-class guided-missile destroyer USS Forrest Sherman departed from its homeport at Norfolk to the European theater. The ship will serve as the flagship for Standing NATO Maritime Group Two (SNMG2) while carrying out freedom of navigation exercises and participating in “multiple exercises” with allies in the region, according to a U.S. Navy statement.

The ship already completed what the U.S. Navy called a “surge deployment” from February to April while “operating with NATO Allies in the Eastern Atlantic, North Sea and Baltic Sea under commander, U.S. 2nd Fleet.”

The U.S. Navy explained that the USS Forrest Sherman will be working along with the ships of other navies, including Canada, France, Germany, Greece, Italy, Romania, Spain, and the United Kingdom.

“The Sailors aboard Forrest Sherman are incredibly talented and resilient,” Cmdr. Greg Page, commanding officer of USS Forrest Sherman, said. “Their unwavering commitment to the mission helps ensure that our nation’s maritime presence remains strong. “This year has presented multiple opportunities for the Forrest Sherman crew to become proficient operating with our allies and partners. As the flagship for SNMG2, I am excited to continue to work with NATO and demonstrate our professionalism, capabilities and resolve to the world.”

“The Forrest Sherman team is ready to respond throughout the region in service of our maritime interests,” said Rear Adm. Scott Sciretta, prospective commander, SNMG2. “In the days ahead we will strengthen our relationships with like-minded allies and partners. We look forward to strengthening the alliance and conducting operations that will challenge us and make us stronger than ever. NATO is capable now, ready for tomorrow and adapting for the future.”

After reporting for duty, the ship will conduct “a range of maritime activities in support of NATO allies and European Partners.”

The USS Forrest Sherman’s deployment to the European theater comes at a particularly fraught time for the continent. With war continuing to rage in Ukraine and both Sweden and Finland applying for membership with the North Atlantic Treaty Alliance, the situation is tense.

The Finn’s and Swede’s decision to apply for NATO membership flies in the face of nearly eighty years of carefully measured neutrality, which is understandable given the country’s very close proximity to Russia. Now, however, it is clear that a policy of neutrality is no longer possible but that both Helsinki and Stockholm must apply for NATO membership if they are to remain safe and secure.

Though a single Arleigh Burke-class guided-missile destroyer is hardly enough to drastically alter the balance of power in Europe, its presence comes as a reassurance to European allies.