U.S. Navy Moves Cautiously Ahead With Its New Destroyers 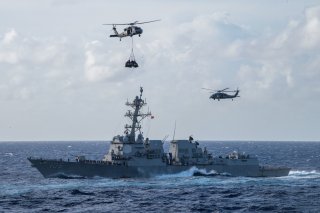 In the past, some significant United States Navy ran disastrously over-budget while under-delivering. The Navy wants to change that.

The United States Navy is accelerating the build rate for its Constellation-class guided-missile frigates. The U.S. Navy intends the new class of warship to succeed the Arleigh Burke-class destroyers, long the backbone of the United States sailing service.

The Constellation-class is a big-ticket item. And while it is based on a proven Franco-Italian design, the new warship would incorporate a number of new technologies, including a more comprehensive stealth design that raises developmental risks.

Wording from the Fiscal Year 2022 appropriations law explains that “while the [new U.S. Navy frigate] is based on a proven hull design and mature shipboard technologies, it remains a new class and the Navy and the shipbuilding industrial base have had past production challenges in managing costs, technical concurrency, design changes and schedule of lead ships of a class.”

“There is concern that prematurely adding a second [new warship] shipyard before the first shipyard has identified and corrected technical and production issues will inject unneeded risk and complexity into the program,” the law says.

One specific clause in the FY 2022 law mandates that “prior to award of a contract for second [frigate] shipyard, the agreement directs the Navy to prioritize the following objectives: technology maturation and risk reduction for critical shipboard components; major systems integration; full ship technical data package creation; and successful operationally realistic testing for the first ship.”

Furthermore, the agreement requires the “Secretary of the Navy to submit a report 90 days prior to awarding a contract for the second [warship] shipyard to the congressional defense committees outlining the acquisition strategy for achieving the full frigate program of record and meeting these technology maturation and risk reduction objectives.”

One of the United States Navy’s most embarrassing projects has been the Zumwalt-class guided-missile destroyer. The innovative ship relied on a number of new and untested technologies, some more successful than others.

Although the ship is thought to be highly stealthy, one of its primary capabilities, shore bombardment in support of forces on land, has turned out to be a huge disappointment. The Navy opted to install a pair of long-range 155mm naval guns into the ships. Folded into stealthy pods, they would have hit targets at extreme ranges.

Unfortunately for the Zumwalts and the Navy, specialized ammunition was never built for the guns thanks to their prohibitively high costs: over $1,000,000 per shot.

The lesson learned in the Zumwalt-class’ development means that the Navy does not want to bet big on the Constellation-class prematurely. Instead, the move will put pressure on the class shipbuilders to get the design right before the warships enter serial production.