The U.S. Marines Are Going All-in to Get Ready for China 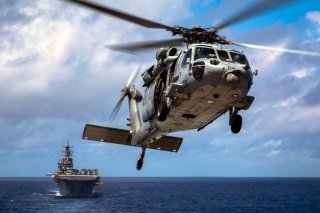 The Congressional Research Service, a non-partisan think tank that reports to lawmakers, recently released a document covering the current state of American ground forces in the Indo-Pacific region and which issues exactly Congress should keep in mind.

This document is particularly pertinent to the Marine Corps, the United States' force-in-readiness, which is currently in the throes of some of the most significant institutional changes it has experienced in the last eighty years.

As part of the Commandant of the Marine Corps’ Force Design 2030, the Marine Corps is shifting from a large, primarily land-based force optimized for counter-insurgency in the Middle East to one that will be able to go toe-to-toe with the Chinese in the Indo-Pacific—and win.

“As the [Marine Corps] guidance states: “Stand-in forces [are] optimized to operate in close and confined seas in defiance of adversary long-range precision ‘stand-off capabilities.’” This requires developing “low signature, affordable, and risk worthy platforms” because existing ships and aircraft are the opposite—highly capable but expensive, few, and highly visible.”

The Marine Corps also favors extremely decentralized, distributed operations, essentially the “ability of relatively small groups to operate independently rather than as part of a large force, as in previous wars." The Corps' strategy continues: “We recognize that we must distribute our forces ashore given the growth of adversary precision strike capabilities ... and create the virtues of mass without the vulnerabilities of concentration.”

“Thus, small Marine forces would deploy around the islands of the first island chain and the South China Sea, each element having the ability to contest the surrounding air and naval space using anti-air and anti-ship missiles. Collectively, these forces would attrite Chinese forces, inhibit them from moving outward, and ultimately, as part of a joint campaign, squeeze them back to the Chinese homeland,” it continues.

This could represent a tremendous change for the Marine Corps. The Center for Strategic and International Studies explained that the Marine Corps “would leave sustained ground combat to the Army and focus on the littorals. Ground wars in the Middle East, North Korea, and Europe would be Army responsibilities.”

In addition to the Navy-Marine Expeditionary Ship Interdiction System, or NMESIS (essentially a remote-controlled JLTV equipped with a pair of potent anti-ship missiles), the Marine Corps is the Ground/Air Task Oriented Radar (G/ATOR), a communications system.

Marine Corps information explains that the G/ATOR’s “interoperability with Naval systems and transportability make it a critical component to achieving Force Design [2030].... Initially fielded in 2018, G/ATOR can support various missions, depending on the “block” of software used on a single hardware platform. G/ATOR Block 1 provides air defense and surveillance capabilities, while Block 2 supports artillery operations.”