The U.S. Military Will Soon Have New Sniper Rifles 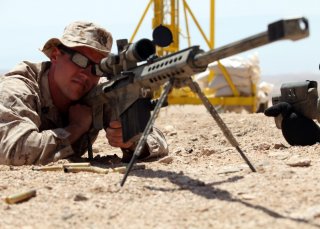 The MK22 has now completed all aspects of the Production Qualification Testing and Operational Testing phases.

U.S. SOCOM had initially announced in 2016 that it was in search a new modular, multi-caliber bolt action sniper rifle that would be capable of converting between .300 Norma Magnum, .338 Norma Magnum and 7.62x51 mm through a “full and open competition.”

With this initial production order, deliveries of the new rifle will commence in January 2021.

“We are pleased to have reached this milestone with the project and look forward to providing our warfighters with this highly capable platform,” said Joel Miller, the director of Global Military Sales at Barrett Firearms.

The MK22 is an updated version of the Barrett Multi-Role Adaptive Design (MRAD) sniper rifle, which the DoD selected as its Advanced Sniper Rifle in 2019.

The fact that Barrett has become so well respected for its military-grade rifles is notable, as the company only entered the domestic gun market in 1982. Even then it wasn’t seeking to be the maker of a range of firearms but rather as the producer of a very specific weapon—the Barrett M82 sniper rifle, chambered in the .50 BMG round. In the process, the company founder Ronnie G. Barrett offered a solution to a problem the military really didn’t know it had, which was how to use a rifle that could shoot nearly a thousand yards.

What is also notable is that Ronnie Barrett wasn’t actually a trained gun designer—he was a professional photographer who became intrigued with the idea to develop a rifle that could fire the .50 BMG round. The concept of large rifles actually dated back to World War I, when the German military fielded its Tankgewehr M1918 anti-tank rifle, and later the British adopted the similar Boys anti-tank rifle. As the thickness of armor increased, these weapons could do little if any significant damage.

By the Cold War, there was little interest in such a weapon, and Barrett struggled to find anyone interested in helping develop his concept. Barrett’s first rifle, the Barrett .50 BMG, was completed in 1982. It was a shoulder-fired, semi-automatic rifle designed around the .50 BMG cartridge. Unique among firearms, the Barrett rifle’s barrel recoiled backward after firing. A rotating-lock breech block equipped with an accelerator arm used part of the recoil energy to push back the block on firing. This cycled the action, cocked the firing pin, and loaded a new round from a ten-round steel magazine.

While the U.S. military didn't immediately see the need for Barrett’s design, the Army did move forward with Barrett’s semiautomatic design. That weapon, which became the M82, proved its worth in Operation Desert Storm, and Barrett has since developed several other models including the M95, M99 and M99-1. The U.S. military employs the M82A3 version as well as the M107 model as “anti-material rifles,” where it is used against small watercraft, radar equipment, missile launchers and even stationary enemy aircraft.