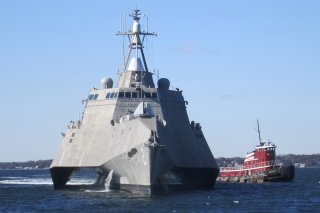 Last weekend the U.S. Navy commissioned the tenth Freedom-class Littoral Combat Ship (LCS) into the fleet. The dedication of the USS St. Louis (LCS 19) was carried out in a private event due to the public health and safety restrictions of the ongoing coronavirus pandemic.

The warship is the twenty-second LCS to be delivered to the U.S. Navy, and the tenth of the Freedom-class variant, while it is also the seventh ship to bear the name St. Louis.

“Nearly two hundred years after the first ship to bear the name was launched, today we commission the seventh USS St. Louis,” said Secretary of the Navy Kenneth J. Braithwaite. “Much like that sloop of war did in 1828, LCS-19 and her crew will protect the U.S. and our interests near and abroad. Whether conducting counter-narcotic operations in the Caribbean or working to enhance interoperability with partners and allies at sea, USS St. Louis will provide maneuverability, stability and lethality in today’s era of great-power competition.”

Fast, Agile and Not Without Problems

The littoral combat ships were designed to be fast, agile and serve as a networked surface combatant. Its primary mission includes combating a number of potential threats to a U.S. fleet including those from submarines, littoral mines and other surface threats. The strength of the LCS is in its innovative design, which includes modularity for operational flexibility that allows for rapid adjustment of interchangeable mission packages onto the same seaframe.

In theory that should allow an LCS to fulfill a specific mission and then be uninstalled, maintained and upgraded at the Mission Package Support Facility (MPSF).

The role in which the ships would be used has evolved over the years—transitioning from its original role where it was intended to operate in coastal or littoral regions and reconfigured to deal with over-the-horizon missiles as well as taking on a role in anti-submarine warfare (ASW) and mine hunting. The ship’s shallow draft does allow it to hunt submarines, mines and other threats in areas not deep enough for deeper draft ships.

However, the vessels don’t actually have the proper weapon to be utilized in an over-the-horizon anti-ship capability, and the current weapon system—the Hellfire—at a range of just five miles. There have also been questions about how effective or even efficient the modular systems might be, especially in combat zones.

The Navy has worked to address those issues and has consistently worked to upgrade the original platform and to allow it to accommodate a wider range of weapons systems. This could further expand the envisioned mission scope for the LCS from a limited littoral platform that will allow it to operate a true blue-water warship, which is why the Navy is sailing full steam ahead. The LCS is now the second-largest U.S. Navy surface ship in production.

“The littoral combat ship has proven to be an effective and adaptable platform capable of multiple missions in our area of responsibility,” said Adm. Craig Faller, command of U.S. Southern Command. “It has become an end-game enabler for U.S. Coast Guard law enforcement authorities who disrupt transnational criminal organizations and the smuggling of deadly narcotics. Adding the LCS to our Enhanced Counter Narcotics Operation is helping save lives.”

In June, the Navy commissioned the Independence-variant littoral combat ship USS Kansas City (LCS 22), and the ship arrived at its homeport of San Diego a month prior.