A U.S. Navy Littoral Combat Ship Was Just Towed Back to Port 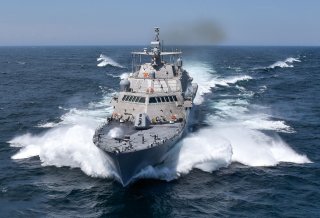 There is no denying that Detroit, Michigan has seen better days. The city, which underwent the largest municipal bankruptcy in U.S. history in 2014, has slowly been on the road to recovery yet it remains a shell of its former self. In what is almost a strange parallel, the U.S. Navy's warship to bear the name USS Detroit (LCS 7) suffered an engineering casualty on its return trip to its home port in Florida last week and had to be towed into Port Canaveral.

The littoral combat ship (LCS) lost power on its return journey from a deployment to Latin America. It was towed back to port by a tug as well as the supply vessel Gary Chouest, DefenseNews reported.

"While conducting routine operations in the U.S. Fourth Fleet area of responsibility, the USS Detroit (LCS 7) experienced an engineering casualty," said U.S. Second Fleet spokesperson Cmdr. Ashley Hockycko. "After a thorough technical evaluation, it was determined that repairs would need to be made in port. During the ship's return transit to her homeport of Mayport, Fl., the ship lost electrical power. The ship is currently being towed to Port Canaveral by MV Gary Chouest. Due to deteriorating weather in the area, the ship was towed to Port Canaveral, Fl., the closest port out of an abundance of caution and for the safety and comfort of the crew."

A similar incident occurred with the USS Milwaukee, which was also forced to shut down her engines and then had to be towed back into port during its maiden voyage from the shipyard to the same port of Mayport, Florida.

This is just the latest incident involving the Detroit, which last month suffered another casualty to its combing gear that links its diesel engines to the gas turbine engine. The warship was forced to return to port.

USS Detroit is a mono-hulled Freedom-variant LCS, designed by Lockheed Martin and built at Marinette Marine in Wisconsin. She is the sixth vessel to be named after the city of Detroit, Michigan and was launched in October 2014, and accepted into service in 2016.

She is assigned to Littoral Combat Ship Squadron Two, and became the first LCS to launch an AGM-114 Hellfire missile in March 2017. In May, the Freedom-class warship, along with a detachment from the "Sea Knights" of Helicopter Sea Combat Squadron (HSC) 22, deployed on March 15, 2020 to conduct U.S. Southern Command and Joint Interagency Task Force South's enhanced counter-narcotics operations missions in the Caribbean Sea and Eastern Pacific Ocean.

During that deployment, Detroit, with the embarked U.S. Coast Guard Law Enforcement Detachment (LEDET), disrupted an estimated 1,780 kilograms of cocaine, worth over an estimated street value of $124 million. The crew adjusted to operating in a Covid-19 environment, including changes in guidance and procedures due to the pandemic while still meeting its counter-drug mission.

Detroit will redeploy to Southern Command when repairs are completed.