The U.S. Navy Might Run Out of Tomahawk Cruise Missiles 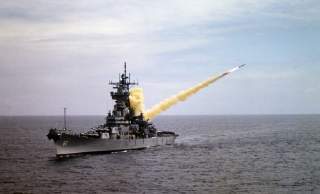