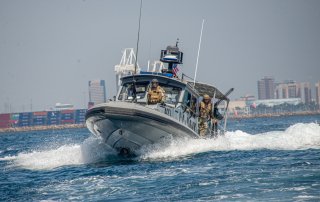 The U.S. Secretary of the Navy, Carlos Del Toro, recently addressed a grouping of Pacific Island nations, voicing his concerns about the devastating effects climate change could have, particularly against these low-lying countries.

“The U.S. Navy-Marine Corps team takes its responsibility to build resilience against climate change seriously,” Del Toro said in the U.S. Navy statement. “The Department of Defense, and indeed the entire U.S. government, have made a commitment to island nations to combat climate change, and the Department of the Navy is already working with island nations on their climate defenses.”

Though couched in ambiguity, Del Toro’s visit was prompted, at least in part, by concerns about China. While the rhetoric coming out of Beijing centers on Taiwan as an explicit target of forced unification, the country’s expansionist intentions may not be limited to just that island.

Some of the small island nations in the Pacific do not share the same regional significance as Taiwan. Nonetheless, their geostrategic importance is evident when considering their mineral wealth and fishing resources—in addition to their potential use as resupply points in the vast Pacific Ocean.

Chinese vessels have already conducted mass illegal fishing operations throughout parts of the Pacific, a move that small and relatively defenseless Pacific Island countries are largely unable to stop.

Still, the Navy statement ended on an upbeat note. “The U.S. Navy has a long list of projects with island nations, including the United States Naval Construction Battalion (SEABEES) work addressing drought on the Marshall Islands and rebuilding shorelines and wetlands on islands across the Blue Pacific,” the Navy said.