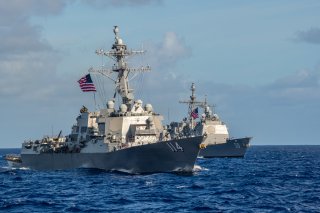 A U.S. carrier strike group is conducting exercises with Japan and the Republic of Korea during heightened tensions, both in the Indo-Pacific and in Europe.

"Coordination with our allies is critical to strengthening our ability to respond to any challenge in the region. We all share common maritime strategy interests and challenges, and are truly stronger when we sail and operate together, “said Rear Adm. Michael Donnelly, commander, Carrier Strike Group (CSG) 5 in a Navy statement.

The U.S. Navy highlighted the trilateral exercise’s utility in fostering positive relations between the three countries as well as improving interoperability between Japan, the United States, and the Republic of Korea.

“The ROK Navy and JMSDF are maritime forces we always benefit from working closely with, and we look forward to more opportunities for operations at sea that deepen our relationship and capabilities.”

In the statement, Capt. Cho Choong Ho, commander, ROK Navy BATRON11 explained that “this ASW exercise allowed us to enhance our combined ASW capabilities against enemy submarine threats.” He added, “we will continue such realistic high intensity exercises so that we can react decisively and overwhelmingly against any provocations.”

U.S. vice president Kamala Harris gave a speech last week from the destroyer USS Howard in which she affirmed that the post-World War II world order was crumbling—and laid the blame at the feet of China, Russia, and North Korea.

“China has challenged the freedom of the seas. China has flexed its military and economic might to coerce and intimidate its neighbors. And we have witnessed disturbing behavior in the East China Sea and in the South China Sea, and, most recently, provocations across the Taiwan Strait,” Harris said.

Harris also charged China with using House Speaker Representative Nancy Pelosi’s recent visit to Taiwan as an excuse for making a show of military force around the island, actions that Harris called destabilizing.

In an unprecedented show of force for Beijing, China launched a record number of missiles around the island of Taiwan during Pelosi’s visit.

Russian and Chinese warships have also stepped up joint activities as of late, sailing together in the East China Sea and off the coast of Alaska—as discovered last month by a U.S. Coast Guard ship on routine patrol.