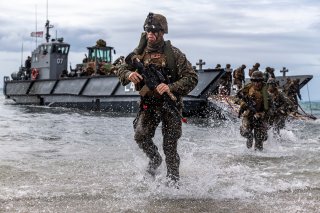 The nation’s top Marine thinks several valuable lessons can be drawn from the ongoing Russian invasion of Ukraine that affirm some of the training and doctrine the Marine Corps uses.

Berger also highlighted Ukraine’s use of surveillance and reconnaissance assets, both for assessing the state of the battlefield and locating and destroying enemy assets, particularly enemy artillery batteries.

“Even when outnumbered, even when up against formations that are two, three, four times as big, if they are mobile, if they’re distributed, if they’re well-trained and well-led, they can actually achieve … a tactical advantage over a much larger organization even if it has some systems that the smaller units do not have," he added. Ukraine's success "reaffirms" the need to "entrust, empower junior leaders. Stop micromanaging.”

“Frankly, allow them to make decisions in lieu of detailed guidance, and then don't jump down their throat if it's done a little bit differently than you had in mind. Actually, reward ‘em for taking initiative. Don't wait. Lean into it. Understand and accept risk,” Berger added.

Just as necessary, however, is the physical experience. Combat in Ukraine “reaffirms the physical aspect of combat as well,” said Berger.

“These aren’t machines versus machines. There’s a human toll. There’s an endurance factor. All of the physical toughness part that is the heart and soul of the Marine Corps [is] all playing out in Ukraine as well,” he added.

He noted that he didn’t think “it's a big surprise to those of us who know that many of the Ukrainian tactical leaders trained in the U.S. at our schools alongside us.”

Berger is implementing some of the most significant restructurings in the Marine Corps history. His Force Design 2030 initiative aims to optimize the Marine Corps for a semi-littoral war in the Pacific to bottle the Chinese navy as close to the mainland as possible by denying them access to crucial land features and contesting the Chinese navy’s surface ships and submarines wherever possible.

Force Design 2030 also directs the Marine Corps to establish distributed logistics and resupply chains whenever possible, eschewing static—and vulnerable—ammunition dumps. Berger believes that adapting resupply to a maritime environment will give Marines the edge in a war in the Pacific.

“That's that agility of the mind which we press into Marine leaders all the time.”