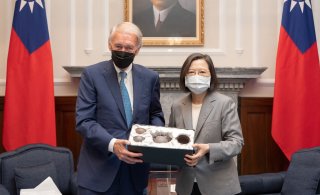 A delegation of American lawmakers arrived in Taiwan on Sunday for a two-day visit to the island and consultations with Taiwanese president Tsai Ing-wen—marking the second U.S. government visit to the island within two weeks, following the far more controversial and high-profile visit of Speaker of the House Nancy Pelosi (D-CA) in early August.

The American Institute in Taiwan, a U.S. government-run nonprofit which operates as Taiwan’s de facto U.S. embassy, announced the visit on Sunday. In its statement, the institute claimed that a five-member delegation, led by Sen. Ed Markey (D-MA), had arrived on the island as part of a broader trip to the Indo-Pacific region.

“The delegation will meet with senior Taiwan leaders to discuss U.S.-Taiwan relations, regional security, trade and investment, global supply chains, climate change, and other significant issues of mutual interest,” the institute’s statement read. Tsai’s office also confirmed the visit, announcing that her meeting with the lawmakers would take place on Monday morning and suggesting that it “once again demonstrates the United States Congress’ firm support for Taiwan.”

The U.S. delegation’s visit comes during rising military tensions around the island, mainly driven by Chinese anger at Pelosi’s visit. The speaker’s trip—the first time that the third-most powerful U.S. official had visited Taiwan since 1997—was followed immediately by Chinese military maneuvers and live-fire exercises in six locations surrounding Taiwan. Following Pelosi’s departure, Beijing also launched a series of missiles over the island, an unprecedented action in the history of cross-strait relations.

Although Taiwan has governed itself since 1949 and the government of mainland China has never controlled it, Chinese leaders in Beijing claim the island as a rebellious province and have repeatedly vowed to retake it by any means necessary. Taipei has accused the Chinese government of using Pelosi’s visit as an excuse to carry out pre-planned military drills in preparation for an invasion and began its own military exercises preparing to counter one. Both sides’ drills have since ended, but tensions remain high; Taiwan’s defense ministry reported on Sunday that six Chinese ships and twenty-two planes remained active in the strait, with half of those crossing the strait’s halfway point onto the unofficial “Taiwanese” side.