China Warns of ‘Serious Consequences’ as Pelosi Travels to Taiwan 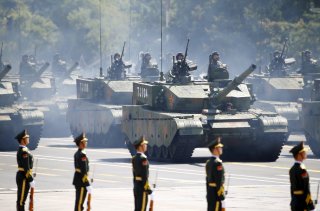 Taiwanese media confirmed on Monday that Speaker of the House Nancy Pelosi, the third-most-senior American official, would travel to Taiwan on Tuesday evening—an announcement that elicited immediate and sharp condemnation from the Chinese government, which described the visit as a “gross interference in China’s internal affairs” and obliquely threatened to use military force in retaliation.

Chinese Foreign Ministry spokesman Zhao Lijian warned on Monday that “there will be serious consequences if [Speaker Pelosi] insists on making the visit” to Taiwan. The spokesman claimed that Beijing was “fully prepared for any eventuality” regarding the visit, appearing to suggest that China could use force to prevent the trip from taking place.

“The People’s Liberation Army will never sit by idly,” Zhao said. “China will take strong and resolute measures to safeguard its sovereignty and territorial integrity.” He did not elaborate on what measures would be used, and when asked, simply said, “If she dares to go, then let us wait and see.”

The Liberty Times, a major Taiwanese newspaper, reported on Monday that Pelosi would arrive on the island on Tuesday night and visit the Legislative Yuan, Taiwan’s parliament, on Wednesday before returning to her previously scheduled tour of Asia. Neither Pelosi’s office nor the Legislative Yuan confirmed the timetable, and the State Department did not directly address the issue.

At a press conference on Monday, National Security Council spokesman John Kirby emphasized that Pelosi had “the right to visit Taiwan” and claimed that the Chinese government had unnecessarily provoked tensions with the United States.

“There is no reason for Beijing to turn a potential visit, consistent with longstanding U.S. policies, into some sort of crisis,” Kirby said. The spokesman indicated that U.S. policy toward Taiwan had not changed, claiming that Washington continued to adhere to the “One China” principle and would not recognize Taiwanese independence.

Although the People’s Republic of China—the communist-led government of China founded by Mao Zedong in 1949—has never exercised control over Taiwan, it regards the democratically-governed island as a rebellious territory and has repeatedly threatened to invade if Taipei does not agree to join it voluntarily. Beijing has framed the Taiwan issue abroad as an internal matter, insisting that U.S. commitments to Taipei’s security are violations of China’s sovereignty rather than commitments to an independent partner.

After its diplomatic recognition of mainland China in 1979, the United States cut formal diplomatic relations with Taipei, but has maintained them through the unofficial “American Institute in Taiwan,” which operates as a de facto embassy on the island. The United States continues to train and equip the Taiwanese military, and Washington admitted in 2021 that U.S. troops were present on the island in a training capacity.