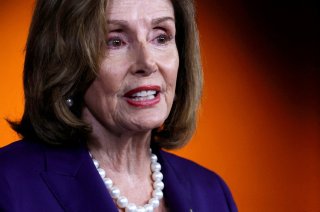 Speaker of the House Nancy Pelosi (D-CA) departed for a Congressional tour of Asia on Sunday, according to a press statement released by her office which made mention of four countries that the highest-ranking member of Congress intended to visit, but left off Taiwan, the self-governing island that China claims as its own.

Although the statement made no mention of Taiwan—which Pelosi announced that she intended to visit earlier in the year—it notably did not rule out the possibility that the delegation could visit other countries, and did not provide a timeframe for when the delegation would return to the United States. CNN reported Monday that senior Taiwanese and U.S. officials told the outlet that Pelosi is expected to visit the island nation. If she visits, Pelosi would be the first incumbent House speaker to visit the island since Rep. Newt Gingrich (R-GA) in 1997.

The United States and Taiwan have not had formal diplomatic relations since 1979, but the “American Institute in Taiwan” operates as a de facto embassy. Although the United States adheres to the “One China” policy, recognizing that Taiwan and mainland China should be part of the same “China,” it has never specified which “China” should have rightful sovereignty over both territories, allowing it to continue furtive cooperation with Taiwan on political, economic, and defense issues.

The Chinese government has strongly protested Pelosi’s prospective visit to Taipei, describing it as a violation of its sovereignty and an encouragement to the island’s pro-independence faction. In a virtual meeting with President Joe Biden last week, Chinese leader Xi Jinping warned that the United States should continue to abide by the One China policy, warning that “those who play with fire will perish by it.” Biden reiterated during the meeting that the United States’ adherence to the One China policy had not changed, and Washington opposed efforts to undermine peace and stability in the Taiwan Strait—an apparent reference to ongoing military exercises in China’s southeastern Fujian province.

Beijing has never acknowledged Taiwan’s self-governing status, viewing it as a rebellious province, and has repeatedly refused to rule out the possibility of retaking the island by force in the future.