Can a Biden-Xi Call Prevent a Crisis Over Pelosi’s Taiwan Trip? 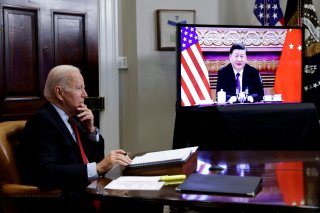 A White House official told CNN that the call is expected to be held on Thursday. Biden acknowledged that a conversation between the two leaders was in the works earlier this week. "That's my expectation, but I'll let you know when that gets set up. I promise I'll let you know,” he said on Monday. Officials previously said a Biden-Xi call was on the agenda before news broke of Pelosi’s Taiwan visit.

It was reported by Politico this month that Pelosi is planning a trip to Taiwan in August. The House Speaker was due to visit Taiwan in April, but she had to postpone after testing positive for Covid-19. White House officials have sought to dissuade Pelosi, citing the escalatory risks of such a trip. "Well, I think that the military thinks it's not a good idea right now," Biden told reporters last week. "But I don't know what the status of it is."

The Biden administration has not publicly commented on the trip, with Press Secretary Karine Jean-Pierre neither confirming nor denying reports that the White House is actively trying to dissuade Pelosi from traveling to Taiwan. “The administration routinely provides members of Congress with information and context for potential travel, including geopolitical and security considerations,” she said, according to the Associated Press. “Members of Congress will make their own decisions.”

Chinese Foreign Ministry spokesperson Zhao Lijiang previously threatened that Beijing would respond to a visit by Pelosi with “resolute and strong measures to safeguard its sovereignty and territorial integrity.” Biden administration officials have expressed concerns that China may try to impose a no-fly zone over the island in a bid to block Pelosi’s visit.

Pelosi suggested that the Biden administration’s concerns stem from the fear that her “plane would get shot down, or something like that, by the Chinese,” adding that she has not heard directly from the president on the Taiwan trip matter. “It’s important for us to show support for Taiwan,” she said. “None of us have ever said we’re for independence when it comes to Taiwan. That’s up to Taiwan to decide.”

A growing number of GOP lawmakers have lent bipartisan support to Pelosi’s prospective Taiwan trip. “Speaker Pelosi should go to Taiwan and President Biden should make it abundantly clear to Chairman Xi that there’s not a damn thing the Chinese Communist Party can do about it,” said Sen. Ben Sasse (R-Neb). “No more feebleness and self-deterrence. This is very simple: Taiwan is an ally and the speaker of the House of Representatives should meet with the Taiwanese men and women who stare down the threat of Communist China,” he added.