Biden Is Right: The United States Must Defend Taiwan 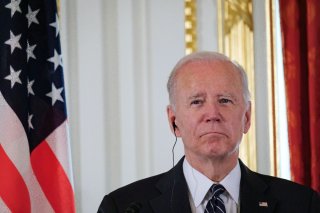 For decades, U.S. policy toward Taiwan has been characterized as “strategic ambiguity,” or intentional ambiguity about what the United States would do if China attempted to take Taiwan by force. The policy tells China, “don’t count us out,” and Taiwan, “don’t count us in.” With this stance, American leaders have sought to deter aggression by Beijing and a push for independence by Taipei. Washington has long feared that an explicit policy of defending Taiwan would put too much power in Taipei’s hands and lower the cost to Taiwan (at Washington’s expense) of declaring independence, thus making a war with China over Taiwan more likely, something the United States has long sought to avoid.

While Americans support the self-determination of any people in principle, Taiwan's case is unique. Following the Potsdam and Cairo summits near the end of World War II, meetings which included Chinese president Chiang Kai-shek, the Allies affirmed the Chinese position that Taiwan was one of the Japanese-held territories that should be returned to China after Tokyo’s defeat. However, the subsequent Chinese Civil War between Communists (today’s leaders of mainland China) and Nationalists (who moved their regime to Taiwan in 1949, having lost the civil war), brought a new twist to that historical reality. While Beijing’s claims to Taiwan have a historical basis, they are tenuous as it relates to current political realities. Since 1895, when China ceded Taiwan to Japan, mainland China has only controlled the island for four years (1945-1949). Under the leadership of the Chinese Communist Party, China has never controlled Taiwan. Taiwan’s democratization, starting in the late 1980s, has pulled Taiwan’s people further and further from Beijing politically. In the end, despite the historical realities of Taiwan’s connection to China, from an American perspective, it is hard to deny the right of the people of Taiwan to determine their own destiny.

On May 23, when asked by a reporter in Tokyo during his press conference with Japanese prime minister Fumio Kishida whether the United States would defend Taiwan if it was attacked by China, Biden replied, “Yes…That’s the commitment we made.” He did not, however, completely revise U.S. policy when he elaborated that his administration “agree[s] with a one-China policy; we've signed on to it and all the intended agreements made from there. But the idea that—that [Taiwan] can be taken by force—just taken by force…is just not appropriate.”

I believe that this has always been U.S. policy—if China attacked Taiwan, the United States would act to defend Taiwan. What is different is that U.S. leaders have never stated this openly. Discussing U.S. policy toward Taiwan at the June Shangri-La Dialogue in Singapore, U.S. secretary of defense Lloyd Austin issued a more traditional statement, saying that U.S. policy had not changed and that Washington “categorically oppose[s] any unilateral changes to the status quo from either side. We do not support Taiwan independence.”

While not walking away from its traditional positions, it appears that the United States is being less ambiguous about its commitment to Taiwan. I believe this is warranted for several reasons.

First, under Xi Jinping, China has moved to a more authoritarian (even totalitarian) politics at home and a more aggressive and robust foreign policy orientation abroad. All of this indicates a military move against Taiwan is more conceivable than was the case previously.

Second, China has continued to increase its year-on-year defense spending, has moved from a minimalist nuclear deterrent to a first-strike nuclear capability, strengthened its ability to neutralize U.S. military bases and aircraft carriers in the region with long-range missiles, greatly increased its air, sea, and land capabilities in the region adjacent to Taiwan, and exponentially increased its air incursions into Taiwan’s air space. All of this lowers the potential cost of a Chinese attack against Taiwan. The air incursions in particular are aimed at achieving a desensitization effect in preparation for an invasion.

Third, Chinese leaders have a “sacred commitment” that will not ever go away, and Xi Jinping has made it clear that he will not back away from China’s commitment to see Taiwan return to the mainland, whether by suasion or force.

Fourth, given the changes he has made to the constitution, Xi is now an extraordinarily powerful leader without term limits and very little accountability, making potentially reckless behavior more conceivable than it was previously.

Fifth, the upcoming Chinese Communist Party’s 20th Party Congress in the fall may impact Xi’s thinking toward Taiwan. The meeting is vital for Xi to gain approval for a rare third term, which most observers believe he is planning to do. Some believe Xi sees the return of Taiwan as an important part of his legacy, made perhaps more pressing given his changes to the constitution, the centralization of power, and an economy negatively affected by his policies on the Covid-19 pandemic and U.S. trade relations, among other things, make it more likely that he is seeking to buttress support for his rule. The return of Taiwan to mainland China might be just the ticket.

Finally, the war in Ukraine may have impacted Xi’s thinking about the timing of a move against Taiwan. Some observers have argued that the robust response from the United States and NATO to Putin’s aggression, coupled with the unity of the West, might give Beijing pause as it considers any move against Taiwan. That may be true but, on the other hand, Beijing might also conclude that China and its economy are more important to the world than ever, given the economic disruption wrought by the Russo-Ukrainian War. Therefore, economic concerns, as well as war weariness, might see a less unified Western response to Chinese aggression against Taiwan. If true, China might have an incentive to move against Taiwan.

What does all of this mean for the United States? China will make a move against Taiwan sooner rather than later, even though Xi was undoubtedly taken aback by the robust Western response to Russia’s invasion of Ukraine. However, I believe Chinese analysts would conclude that the PLA is better equipped and prepared to take Taiwan than the Russian military was to take Ukraine. While that may be true, as Stephen Biddle and others have noted, China’s command and control system is similar to the same top-heavy, centralized Russian military command structure. Unless China achieves a quick victory, it could suffer the same problems Moscow has faced with command and control.

One big difference between the Chinese and Russian militaries, however, would be morale. Chinese troops will be highly motivated and nationalistic during an operation to take Taiwan. By contrast, Russian troops do not appear to have been told why they were invading Ukraine and troop morale has been poor as a result. This will likely not be a problem for Beijing. While I believe the Taiwanese will fight as hard for their territory as the Ukrainian people have, it would be harder for the international community to keep them supplied given the island’s unfavorable geography.

Thus, deterring a Chinese attack on Taiwan is more important to American interests than ever.

There are two important historical failures to deter military adventurism in the past that cost the United States dearly. The first is the January 1950 National Press Club speech by U.S. secretary of state Dean Acheson. During his speech, Acheson excluded South Korea and Taiwan from the U.S. defense perimeter in East Asia. Most analysts have concluded that this was seen by North Korean leader Kim Il-Sung as a green light to invade his southern neighbor and that the United States would not intervene. A similarly tragic American diplomatic miscue occurred in 1990 when April Glaspie, the U.S. ambassador to Iraq, passed a message from her superiors to Iraqi leader Saddam Hussein that the United States did not take a position on Iraq and Kuwait’s border dispute. Saddam seems to have read this note as a policy of nonintervention and it may have encouraged him to invade Kuwait in 1990. In both cases, however, the United States and its allies were drawn into the conflicts.

A lack of clarity on what the United States’ position was in these two instances invited aggression by adversarial powers. Today, it is concerning that a lack of clarity on the U.S. position toward Taiwan may have the same effect on leaders in Beijing and lower the bar for a potential decision to invade Taiwan. If Washington’s position is that it would defend Taiwan militarily it should communicate this to Beijing clearly, regardless of the political fallout that might ensue. I conclude that this was Biden’s intention in saying “yes” to the reporter’s question in Tokyo. This is the right messaging if it is indeed Washington’s position. I believe it is, and it is good that this has been communicated to Beijing, for Washington cannot afford any miscalculations in its communications with China.