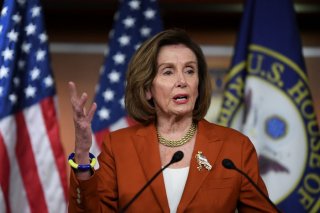 It is essential that House Speaker Nancy Pelosi (D-CA) stands her ground and follows through on her plans to visit Taiwan. Last week, the Financial Times reported that Pelosi plans to lead a congressional delegation to visit Japan, Singapore, Indonesia, and Malaysia, and include Taiwan on the travel itinerary.

A visit to Taiwan, previously planned for this past spring, was canceled because members of the delegation had contracted Covid-19. Pelosi, who has always been positive about relations with Taiwan, is eager to visit the country before her retirement from Congress. She is now eight-two and may step down from her leadership post at the end of the year.

For Taiwan, a visit from a congressional delegation is important because it has few diplomatic relations. These visits provide a political boost and an important counterbalance to Chinese threats and intimidation. Beijing is trying to prevent these visits by threatening Taiwan. Sometimes these threats produce the intended result, but often it has the opposite effect.

In this case, the threats and wording were sharper than usual, and it is of course important that the Biden administration weighs the risks and makes the right decision.

It is, therefore, necessary to understand the underlying psychology of the Chinese government. The tactic on the Chinese side is always to over-react—“wolf-warrior diplomacy”—in order to corner the other side, Americans, Taiwanese or other countries.

An American diplomat who served in Beijing for many years, explained it this way: “Chinese diplomacy is like driving a car in Beijing: there are no real traffic rules, the one who pushes the hardest gets to the destination first.” According to him, it is important to push back hard and not be intimidated.

For Pelosi's visit, that means promoting a policy that includes the following elements.

First, Pelosi should follow through on her plans to visit Taiwan and express broad support for its democratic system. The Taiwanese have fought hard for their democracy and deserve all the support of the international community.

Second, ensure that the U.S. military maintains the necessary capacity “…to resist any resort to force or other forms of coercion that would jeopardize the security, or the social or economic system, of the people on Taiwan” as codified in Art.1(b)(6) of the 1979 Taiwan Relations Act;

Third, emphasize that a visit does not represent a change to the One China policy, which means that the United States recognizes the government in Beijing as the sole legitimate government of China and that Taiwan is part of China.

Fourth, make it crystal clear that the One China policy means something very different from the “One China principle” propagated by Beijing. That “principle” has never been endorsed by either the United States or Europe.

Fifth, express indignation about the unacceptable threats, particularly those expressed in China’s state-owned Global Times newspaper. These threats against Pelosi’s safety are outrageous and unacceptable.

This discussion is not just an American dilemma or discussion, but also of great importance to Europe. Several European countries such as Lithuania, the Czech Republic, and Norway have similarly been threatened and intimidated by China.

In order to have a sufficient counterweight to China, it is necessary that the United States and Europe jointly push back against China’s aggressive behavior, and work more closely together in their support for Taiwan to ensure that it continues to exist as a free and democratic nation-state and becomes a full and equal member of the family of nations.

Gerrit van der Wees is a former Dutch diplomat and teaches about the history of Taiwan at George Mason University in Fairfax (Virginia) and American relations with East Asia at George Washington University’s Elliott School for International Affairs.