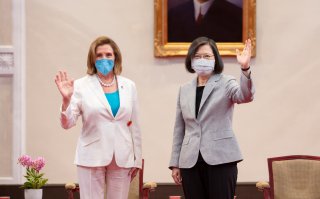 House Speaker Nancy Pelosi’s controversial visit to Taiwan has garnered support from lawmakers on both sides of the aisle. "We support Speaker of the House of Representatives Nancy Pelosi's trip to Taiwan," read a statement issued by over two dozen senators, including Senate Minority Leader Mitch McConnell. "For decades, members of the United States Congress, including previous Speakers of the House, have traveled to Taiwan. This travel is consistent with the United States' One China policy to which we are committed. We are also committed now, more than ever, to all elements of the Taiwan Relations Act," the statement continued.

Yet Pelosi’s trip has elicited considerable opposition from not only a diverse array of experts and high-profile figures, but the Biden administration itself. “I have a lot of respect for House Speaker Nancy Pelosi,” wrote journalist Thomas Friedman for the New York Times. “But if she does go ahead with a visit to Taiwan this week, against President Biden’s wishes, she will be doing something that is utterly reckless, dangerous and irresponsible.” Friedman argued that Pelosi’s “purely symbolic” visit will not contribute to Taiwan’s security and would only serve to weaken Washington’s already-fraught geopolitical position, highlighting the risks of antagonizing China at a time when the Biden administration is putting considerable resources into convincing Beijing not to provide military support to Russia amid its invasion of Ukraine. “Given all of that, why in the world would the speaker of the House choose to visit Taiwan and deliberately provoke China now, becoming the most senior U.S. official to visit Taiwan since Newt Gingrich in 1997, when China was far weaker economically and militarily?”

Former President Donald Trump broke ranks with lawmakers in his party to blast Pelosi’s visit, giving voice to what experts have described as a growing divergence between Republican politicians and the GOP base on key foreign policy issues. “Why is Crazy Nancy Pelosi in Taiwan. Always causing trouble. Nothing she does turns out well,” he wrote on his Truth Social platform. Leading conservative political commentator Tucker Carlson argued that Pelosi’s visit has “escalated tensions in the region throughout Asia” and will be used by the Chinese Communist Party as a pretext to ramp up its aggressive behavior toward Taiwan.

Biden administration officials provided rhetorical cover to Pelosi’s trip after the fact. “As we have said, the Speaker has the right to visit Taiwan,” National Security Council spokesman John Kirby said during a press briefing on Tuesday. “The Speaker’s visit is totally consistent with our longstanding One China policy … We said we do not support Taiwan independence. And we’ve said, as I said again yesterday, that we expect cross-Strait differences to be resolved by peaceful means.”

But the administration initially tried to dissuade Pelosi from going to Taiwan, with the White House previously expressing concerns over her personal safety and the risk of Chinese retaliation. “The military thinks it’s not a good idea right now,” President Joe Biden told reporters in late July. Biden administration officials reportedly warned that Pelosi’s trip comes at a particularly volatile moment in Chinese politics, as President Xi Jinping lays the groundwork for an unprecedented third term.