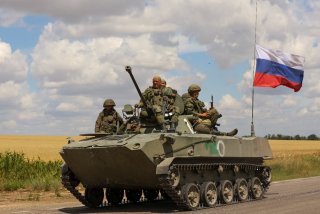 Ukrainian forces’ impressive military performance has reinforced the view that an outright victory against Russia is possible. But an unqualified Ukrainian win that dislodges the Russian forces from eastern Ukraine is increasingly improbable. Grinding attrition that makes dangerous escalation a tantalizing option for both countries is more likely. Accordingly, a ceasefire and separation of forces should be a priority for the United States and its allies. The United States has the tools and experience to make it happen.

At this stage, there is a rough consensus that the war will likely end through a negotiated settlement. This settlement will be a variation of the Minsk II agreement signed in 2015 following Russia’s infiltration of the Donbass region and annexation of Crimea, which firmed up tenuous ceasefires and established partial demilitarization, external monitoring, and political reform. The Russian invasion of Ukraine followed the collapse of Minsk II, of course, but this was less a result of the structure of the agreement than of both sides hardening their positions and believing that there were better options for achieving their goals. The costs of the current conflict will force a recalibration that makes the Minsk disposition more appealing.

Neither side can fulfill its maximal war aims: Russia cannot conquer all of Ukraine and Ukraine cannot comprehensively eject Russian forces. Each side also needs minimal assurances. Ukraine needs guarantees that Russia won’t keep trying to wipe it from the map while Russia won’t permit NATO to deploy along its border. These are not unreasonable requirements. Ukraine is an internationally recognized sovereign country. Notwithstanding the disingenuously false pretexts Russian president Vladimir Putin has offered, it is Ukraine’s tilt towards the West that has driven his war, which implicates genuine Russian interests. Both countries require security guarantees.

There is also a widespread assumption that because the opposing leaders (especially Putin) are disinclined to negotiate, talks will emerge only from the war of attrition now underway when both combatants are exhausted. This view does not offer a stable interim solution to a profound geopolitical feud. Both sides have serious concerns that could lead to a sharp and swift escalation.

The Ukrainians are worried that European support is brittle. The effect of Russia’s “gasectomy” on Germany’s economy and politics this winter could weaken its already uneven support for Ukraine. If the Germans defect, other Europeans might follow. Ukraine is also losing thousands of soldiers and civilians while its infrastructure is being pulverized. Notwithstanding the future promise of European Union (EU) membership, Ukrainians likely suspect that the longer the war goes on, the more daunting reconstruction will be and the less inclined potential donors will be to pay for it.

For Russia, the war is depleting their military assets. This could leave them without the ability to project power—notably in Syria, in which they are still invested. More gravely, despite Putin’s nuclear threats, the war might encourage challenges by other states in Russia’s near abroad. And with NATO soon to accept Finland and Sweden, a damaged Russian military will have to spread itself more thinly. Finally, Moscow must worry that Germany could decide that the best way to resolve its economic and political challenges would be to double down on support for Volodymyr Zelensky in the hope of a speedier end to the war.

Given these daunting possibilities, one or both sides will be tempted to break the stalemate before it breaks them. For example, Zelensky could decide to widen strikes against military targets within Russia. Russia, unwilling to accept defeat but militarily hobbled, could step up attacks against civilian targets and initiate strikes against NATO targets linked to the shipment of advanced weapons and supplies to Ukrainian forces. And if there were ever a situation in which the Russians would use tactical nuclear weapons, it would look a lot like the stalemate scenario unfolding now. Steep escalation would render the possibility of negotiation ever more remote, potentially drawing in outsiders and expanding the war.

There are comparable historical circumstances. When Egypt was unable to regain the Sinai Peninsula in a war of attrition with Israel, it decided to escalate the conflict. The result was the 1973 Yom Kippur War, which entailed U.S. and Soviet nuclear brinkmanship, an oil embargo that derailed the American economy, and the deaths of thousands of Israelis and Arabs. In that case, the United States brokered a ceasefire and, without missing a beat, embarked on intensive shuttle diplomacy to negotiate “disengagement agreements” that separated the contending armies and persuaded them to pull back to predetermined lines. A neutral peacekeeping force under the auspices of the United Nations (UN) Security Council was interposed in Syria to monitor compliance, a similar, non-UN force in the Sinai. As the danger of surprise attack receded, serious negotiations became feasible and culminated in the durable Israeli-Egyptian peace agreement reached at Camp David in 1978.

There are, of course, major differences between that era of superpower bipolarity and the less orderly great-power competition of today. But the general point stands: even if it means your capital is safe, a stalemate is not your friend. Such standoffs are inherently unstable and biased towards escalation. The best way out of them is to reduce each side’s fears sufficiently to make meaningful talks about an endgame conceivable.

In the Russo-Ukrainian War, neither side seems inclined to talk to the other at this point. But one of the purposes of diplomacy is to probe adversaries’—and allies’—intentions in a crisis. Arms transfers are key to setting the stage. The United States and NATO should make it clear to Ukraine that if there is a diplomatic opportunity, they expect Kyiv to take it and could turn off the tap if it doesn’t. To Russia, the message would be to seize such an opportunity, or the Ukrainians will be getting a lot more weaponry.

The United States, together with its European partners, should also do what it can to foster diplomatic opportunities. Western diplomatic entrepreneurship might involve proposals of limiting Ukrainian and Russian forces and weapons within mutually determined demilitarized zones, including maritime areas that exclude Crimea. While the interposition of a UN force might seem fanciful, Putin regards the Security Council as a high table for the exercise of Russian power. Even if Moscow has used it in a predominantly obstructionist manner, he might now see a judiciously selected UN force as a useful way to enforce a truce without involving NATO.

It is well and good for the United States and its NATO allies to keep arming Ukraine. But it is also time to encourage both sides to start exploring possibilities for a political solution before escalation puts diplomacy even farther from reach. And unless the United States and NATO condition military assistance on Ukraine’s constructive political engagement, they will lack the leverage to work effectively towards a stable objective.

Steven Simon is the Robert E. Wilhelm Fellow at MIT and a senior analyst at the Quincy Institute for Responsible Statecraft, and served in the State Department and on the National Security Council staff in the Reagan, George H.W. Bush, Clinton, and Obama administrations.

Jonathan Stevenson is a senior fellow at the International Institute for Strategic Studies (IISS) and managing editor of Survival, and served on the National Security Council staff in the Obama administration.