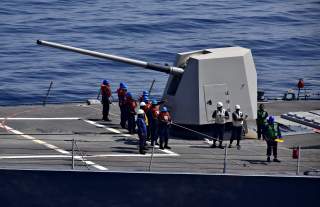 Lots of frigates plus new destroyers. That's the fleet's potential mix of surface warships as it completes a new force-structure assessment, according to the Navy's deputy chief of naval operations.

In a wide-ranging interview with the news website of the U.S. Naval Institute, Vice Adm. Bill Merz discussed the Navy's existing cruisers and destroyers and the new frigates and "large surface combatants" it in coming decades plans to acquire.

The force-structure assessment, or FSA, is due out at the end of 2019. It would supersede the last FSA from December 2016.

The end result, in the 2030s, could be a fleet with more smaller warships. "If I had a crystal ball and had to predict what the FSA was going to do, it’s going to probably recommend more small surface combatants, meaning the frigate," Merz said.

The Navy's 22 1980s-vintage Ticonderoga-class cruisers could be the first casualties of the new plan. The nearly 10,000-ton-displacement cruisers with their 122 missile cells are the biggest and most powerful surface combatants in the fleet.

But the cruisers are old and have suffered structural cracks and other material problems. The Navy for years has asked Congress for permission to decommission the vessels. Lawmakers rejected all the requests and compelled the Navy to enter the cruisers into a refit program.

The Navy is pleased with the condition of its 66 Arleigh Burke-class destroyers and plans to keep all of them in service for 45 years, decommissioning the oldest vessel no earlier than 2036. Another 22 of the 9,000-ton Burkes are under construction or funded, including the first examples of the Flight III version, which adds a powerful new radar.

The $2-billion-per ship Burkes carry up to 96 missile cells. Merz said the Navy could back-fit some of the systems from the Flight III into the older ships in the class.

The Navy in 2020 plans to buy its first new, 5,000-ton missile frigate with 32 missile cells. The original plan was for the Navy to buy 20 frigates to complement 33 lightly-armed Littoral Combat Ships, ultimately giving the Navy one more small surface combatant than it required under the 2016 force-structure assessment.

The future large surface combatant is a wild card. The Navy hasn't finalized the new warship's design. It might use the same combat systems that the Flight III Burke does. It also could borrow elements from the three-ship Zumwalt class of experimental stealth destroyers.

The Navy wants to start buying the new large surface combatant starting in 2025. How many of the ships the fleet acquires depends on how many of the other frigates, destroyers and cruisers the service decides to maintain, and for how long.

But all indications are that the future fleet will include additional smaller ships.